Where to go in Santiago 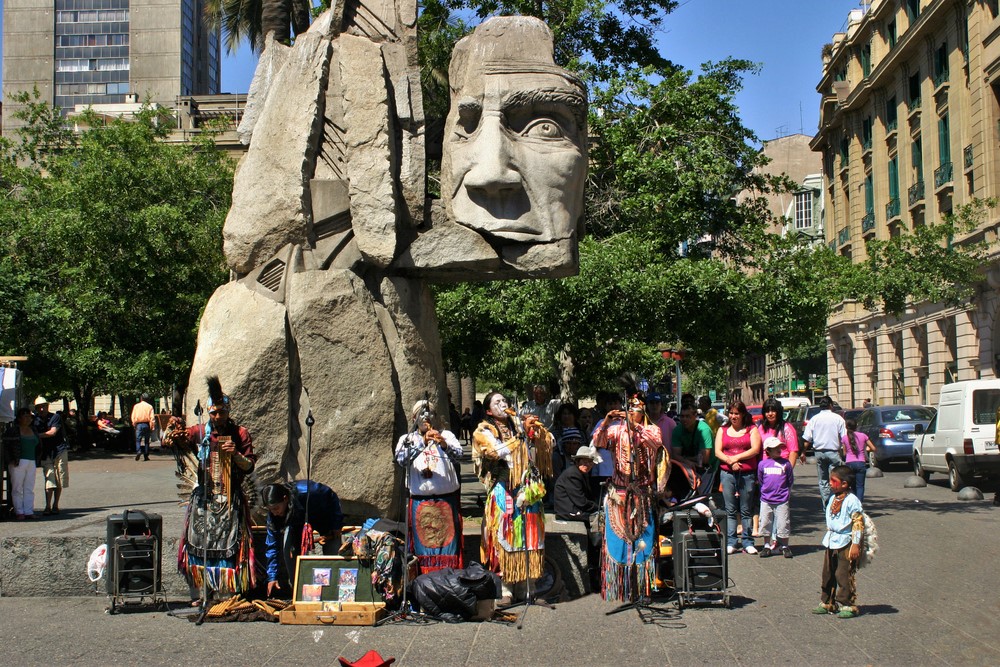 Palacio de la Moneda: Now a National Monument, it was constructed in 1799 to house the Royal Mint. In the middle of the 19th century it was converted into what is today the Centre of Government and the seat of the Presidency of the Republic of Chile.

Palacio de la Real Audiencia y Museo Histórico Nacional: (Palace of the Royal Audience and National Historical museum), declared a National Monument in 1969. It was built between 1804 and 1807. It was the seat of the High Court of the Royal Audience and it was here that the first Government Junta was formed. The museum was created in 1911. It now contains representative displays of the different periods of the history of Chile. The building is neo-classical in style with Tuscan elements. Here the President of the First National Government Junta, don Mateo de Toro y Zambrano, was elected in 1810. The displays in the museum represent different periods from the Discovery up until the Republic.

Santiago Cathedral: Declared a National Monument in 1951. The location is the same as was assigned when the city was originally laid out on the orders of Pedro de Valdivia in 1541. In 1745 the construction of the existing cathedral was started, with the facade being changed subsequently to its present classical and baroque style by Toesca. The two towers were built only at the end of the 19th century. The cathedral contains the mortal remains of the first cardinal of Chile, José María Caro. Inside the precinct is the Museum of Sacred Art.

University of Chile: The main building has been declared a National Monument. It was constructed between 1863 and 1872, and contains the Rector’s office. www.uchile.cl

Casa Colorada: (The Red House) Declared a National Monument in 1960, it is one of the best preserved colonial houses in the city. It was constructed in 1779 by Joseph de la Vega and owes its name to the red colour of the stone facing of the first floor and the painted stucco of the second. The house was the home of the Count of the Conquest, Mateo de Toro y Zambrano, who was president of the First Government Junta of 1810. It now contains the Tourism Office of the Municipality of Santiago and the Santiago Museum.

Chilean Museum of Pre-Columbian Art: The museum was inaugurated in 1981. It houses a collection of 3,000 pieces which illustrate the history of American man. Of particular interest are the pre-Columbian textiles and ceramics. www.precolombino.cl

Cerro Santa Lucia: This hill in the centre of Santiago was named for Santa Lucía by Pedro de Valdivia on the 13th December 1540. Today it is a pleasant place of recreation, offering a beautiful view over the city.

Zoológico de Santiago: The zoo was inaugurated on 12th December 1925 and contains a variety of species of animals. Of particular interest to the visitor are local species such as: Pumas, Condors and Pudú, a small indigenous deer, as well as other species brought from abroad. www.buinzoo.cl/

Palacio de Bellas Artes: The Palace of Fine Arts was declared a National Monument in 1976. The building was designed by the Chilean architect Emilio Jequier, in neo-classical style, and it was constructed in 1910 to commemorate the centenary of the Republic. The Palace is home to the National Museum of Fine Arts. It was inaugurated on 18th September 1910, as a celebration of the Centenary of Chile’s Independence. There are two main entrances to the Palace: from the east you enter the Museum of Fine Arts while the western entrance gives access directly to the Museum of Contemporary Art and the Museum of Popular Art.

Municipal Theatre: Inaugurated on 17th September 1857, the theatre was built under the direction of three architects, Brunet de Baines, Hénault and Aldunate. The later modifications made to the theatre have conserved the general lines of the original design. The interior contains beautiful, refined work; the main auditorium is notable for the richness of its architecture and decoration, dominated by the red colour of the upholstery. The season of performances runs from April to November. It was declared a National Monument in 1974. www.municipal.cl

Santo Domingo Church: Declared a National Monument in 1951. The foundation stone of the church was laid in 1747 and it was the work of the architect Juan de los Santos Vasconcellos. Later, during 1795 and 1796, the architect Joaquín Toesca assumed responsibility for thebuilding. The great beauty of this church lies in the simplicity of its lines and the height of the two brick towers in Bavarian baroque style.

Palacio de Gobierno La Moneda: La Moneda Palace of Government was declared a National Monument in 1951. It is the seat of the Chilean Government. However the building was originally constructed to house the Royal Mint. Work started in 1784 under the direction of the architect Joaquín Toesca y Ricci. Only in 1848 was it converted into the official Residence of the Presidents of Chile. It is a model of classical architecture, with pure lines which are at once vigorous and austere. In 1973 the building suffered severe damage and the Directorate of Architecture of the Ministry of Public works was given the responsibility of restoring it.

Palacio Real de Aduana or Tribunales Viejos: The Royal Customs Palace or Old Law Courts was declared a National Monument in 1969, having been built between 1805 and 1807. It houses the Museum of Pre-Columbian Art, with a permanent display of ceramics, paintings, sculptures and textiles from a variety of pre-Columbian cultures from Mexico to Chile. There is a display room for Meso-America, corresponding to Mexico and Central America, and rooms devoted to the Central Andes (Peru and Bolivia), Northern Andes (Colombia and Ecuador), Southern Andes corresponding to Chile and Argentina and on occasion displays from Brazil. The majority of the best-preserved collections belonged to the Larraín family. There is also a small bookshop offering texts relating to the exhibitions.

Church and Convent of San Francisco Declared a National Monument in 1951. The first church was built in 1572. Later, in the 19th century, the architect Fermín Vivaceta raised the tower which can be seen today. On the high altar is the image of Our Lady of Help in polychrome wood which dates from the 16th century. It is of immense historical value as it was brought to Chile by the Spanish conquistador Pedro de Valdivia. The crypt contains the remains, among others, of the architect Joaquín Toesca and of Pedro de Valdivia’s wife, Marina Ortíz de Gaete. Adjoining the church is what used to be the Cloister of San Francisco, the central court of which is planted with flowers and trees. The cloister contains the Museum of Colonial Art.

Pablo Neruda House – Museum “La Chascona” Declared a National Monument in 1990. The house, which is located at the foot of Cerro San Cristóbal, was the home of the Chilean poet and winner of the Nobel Prize for Literature, Pablo Neruda. In 1955 Pablo Neruda and Matilde Urrutia came to live in this house. The house contains a large number of books, pictures and other objects collected by Neruda over the course of his life. La Chascona is also the home of the Neruda Foundation. Learn more about Pablo Neruda

Los Dominicos Church Declared a National Monument in 1983. It was built by Joaquín Toesca and has the simplicity and purity of line characteristic of this masterly architect. The wood of the broad west doors is blackened with age. Inside the church and in the lateral corridors are exposed beams and cast iron grills.

Church of Our Lady of Divine Providence Declared a National Monument in 1989. It dates back to 1854, when the charity purchased a farm called Lo Chacón on the road to Las Condes. The place was acquired in order to built an orphanage. This was handed over to the care of the nuns of Divine Providence and the avenue was named Avenida Providencia for that reason. The main building, containing more than 20 internal courtyards, cloisters and the chapel, was constructed at the end of the 19th century. The orphanage was home to 1,286 orphans in 1896. The Escolapian Fathers were responsible for running workshops to teach carpentry, cobbling and other trades. The congregation remained responsible for the orphanage until 1941. Later, in 1955, the charity remodelled the orphanage and most of the land was divided into building lots. The building was demolished, with the exception of the chapel and the lateral cloister, which were donated by the congregation to the archbishopric. These structures can still be seen today.

Cousiño Palace Declared a National Monument in 1981. It was constructed between 1875 and 1878 for the Cousiño Goyenechea family. The house in the neo-classical style is surrounded by an extensive garden which still maintains its original style, and is a testimony to splendid past funded by the wealth of the family. It was decorated by artists and craftsmen brought from Europe. Many of the furnishings were specially ordered from abroad, including brocades and silk plush for upholstering furniture, parquet floors with designs in ebony, oak, German beech, Nicaraguan mahogany and walnut, hand painted Italian tiles and a plethora of furniture and adornments. In 1941 it was handed over to the Municipality of Santiago. Important personages such as King Baudouin of Belgium and Presidents Figueiredo, Gregorio Álvarez, De Gaulle and Golda Meir have been lodged in this elegant palace.

Mapocho Station Declared a National Monument in 1976. It was designed by the architect Emilio Jecquier and built in 1912 as the terminal for the train services to Valparaíso and to the city of Mendoza in Argentina. Its most notable features are its facade with three baroque arches and the metal structure of the arched roof which spanned the platforms. In 1987 its service as a railway terminal came to an end and it started to be used as a centre for exhibitions and artistic events. Centro Cultural Estación Mapocho

Alameda Station Declared a National Monument in 1983. In 1857 the railway track between Santiago and San Bernardo was completed, the first stretch of the line to the south. In 1896, in order to roof over the platforms, the metal structure was ordered from France. It consisted of triple jointed porticoes mounted on stone foundations. The mounting of this structure, which can still be seen today, was completed in 1900. The line presently runs from Santiago to the town of Puerto Varas, a distance of one thousand kilometres.

San Agustín Church Declared a National Monument in 1981. The nave is colonial in origin and the structure was restored several times in the 18th and 19th centuries after becoming damaged. The style is neo-classical, as can be seen particularly in its two towers and its facade, with the main doorway carved by the architect Fermín Vivaceta in 1863. Inside the church is kept the image of the May Christ which belonged to “La Quintrala”, a controversial lady of the colonial aristocracy, who ordered it to be removed from her house. The crown of thorns hangs round Christ’s neck after it fell there as the result of an earthquake.