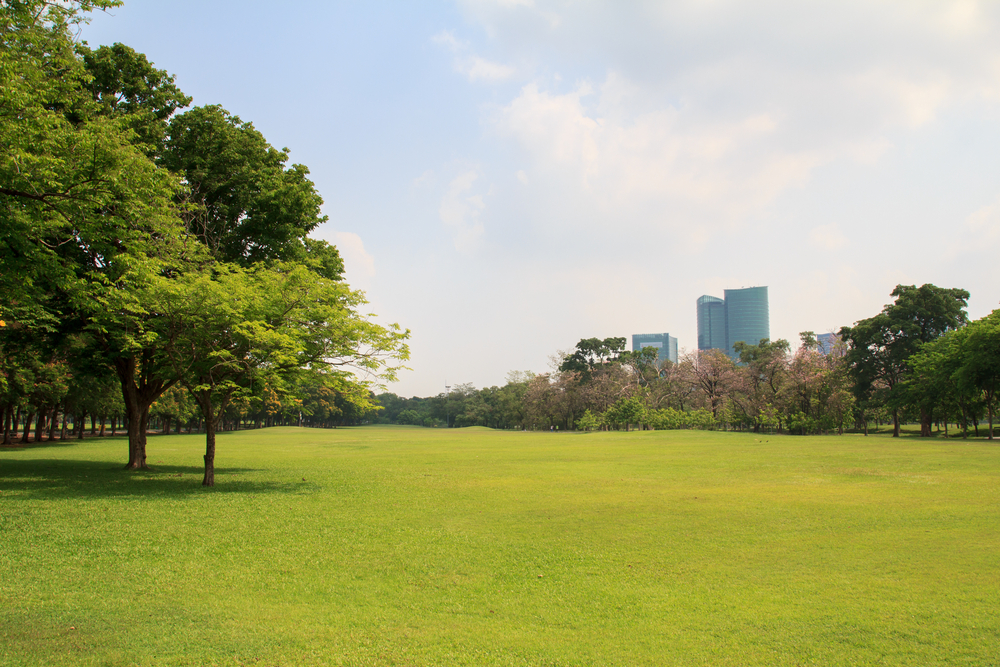 This park is located between San Ignacio, Eleuterio Ramírez, Santa Isabel, Cóndor and San Diego streets. It was created in the middle of the seventeenth century, when the Iglesia de San Diego was built by the Franciscan order. It used to be a halt and resting place for those who were arriving at the city.

Parque Araucano
This park is located at Cerro Colorado 5435 and there are entrances from Calle Cerro Colorado or Avenida Presidente Riesco, between Avenida Manquehue and Avenida Américo Vespucio. The park consists of 30 hectares and is in the municipality of Las Condes. Opening hours are from 8:00 to 22: hrs.

Parque Botánico
The botanic garden is in Avenida Echeñique at the corner of Coventry, in the municipality of Ñuñoa, between Pucará, Echeñique, Pedro Torres and Carlos Aguirre Luco streets. It covers an area of 14,606 m2 and contains more than seventy species of trees, some native and some introduced from abroad.

Parque de Las Esculturas
The sculpture park is in Avenida Santa María 2201. It belongs to the Instituto Cultural de Providencia and was created when it became necessary to re-model a stretch of the Mapocho riverbank, which was destroyed when the river burst its banks in 1982. It was inaugurated in December 1986 with the sculpture ‘Pachamama’ by Marta Colvín.

Parque de los Reyes
This park is between Bulnes, Balmaceda and Morandé streets. It is very spacious and was constructed in celebration of the 500th anniversary of the discovery of the Americas and in honor of the King and Queen of Spain on their visit to Chile. It covers thirty-one hectares and includes an athletics track, children’s games, an artificial lake and the Fuente de España fountain.

Parque Forestal
This park includes the area of the south bank of the Río Mapocho between Plaza Baquedano and Plaza Prat. Among its attractions are: the Fuente Alemana (German Fountain), Monument to the Writers of Independence, Palacio Bruna, Monument to Rubén Darío, sculpture of the god Pan, statue of Bartolomé Mitre, Museo Palacio Bellas Artes, Museo de Arte Contemporanea, Mercado Central and the Estación Mapocho.

Parque Granjaventura
This park is in Avenida Larraín 11095, municipality of La Reina Alta, set among forests and gullies. You can engage in recreational activities and have direct contact with some species of animals. There are adventurous games, a tree-house, hanging bridge, creepers and a greenhouse.

Parque Inés de Suárez
This park is in Calle Antonio Varas 1510, corner of Vasconia. It is an area for rest and relaxation in an enclosed area covering five hectares. It is open every day from 8:00 to 22:00 hrs.

Parque Juan XIII
The park is in the municipality of Ñuñoa between Calle Dublé Almeyda and Avenida Grecia. It covers an area from the garden behind the Casa de la Cultura of Ñuñoa as far as the Centro Comunitario in Avenida Grecia, which is more than three blocks. There is abundant vegetation, children’s games and outdoor areas for recreational activities.

Parque Mahuida
This park is in Avenida Larraín 11095 in the municipality of La Reina. The aim of this initiative is to encourage recreation in the open air and the park covers more than 170 hectares in the Andean foothills above Santiago. There is a nursery with more than one thousand native trees and other original games. There is a riding school, restaurants and an area where Chilean sculptors can exhibit their works.

It is the biggest urban park in Chile, covering 780 hectares. There are recreational areas and a variety of attractions, including the Parque Zoológico Metropolitano, the Jardín Botánico, two swimming pools, picnic areas, a cable-car and children’s games.

This park is in Calle Beauchef 398 and access is by metro line 2, Estación Parque O’Higgins, at the corner of Avenida Matta and Avenida Blanco Encalada. It covers 80 hectares and is well preserved. A ride in this park, on horseback or in a carriage, was one of the typical diversions of Santiaguinos in the nineteenth century.