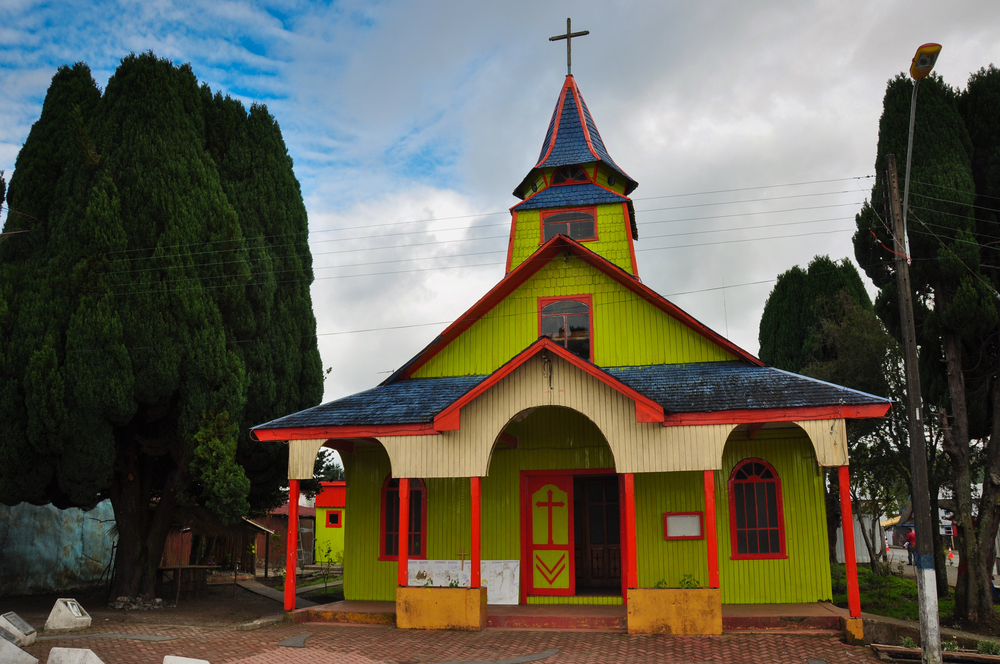 As a result these buildings have gained universal recognition. They are wooden constructions which were built during the 18th century.
The 16 churches on UNESCO’s list are: Achao, Aldachildo, Caguach, Castro, Chelín, Chonchi, Colo, Dalcahue, Detif, Ichuac, Nercón, Quinchao, Rilán, San Juan, Tenaún and Vilupulli.
Santa María De Achao Church
It is situated in Achao’s Town Square, in the district of Quinchao, and it was declared a Historic Monument on 6th July in 1951, by the Supreme Decree N° 5.058.
Achao’s church is the most valuable one in the south of Chile, not just because of its age but because of the detailed woodwork and ornamental motifs.
It is the oldest preserved wooden construction in the south of Chile not to mention the fact that it was the only one built by Jesuit priests during their circular missions in the 18th century. Only the central nave and the side wings were built in the 18th century.
The present day tower would have been built around the start of the 20th century.  Its exterior is subdued but inside, the dome caps are covered in carved motifs which are reproduced on the altars, walls and pulpit. The columns are Solomonic in style and covered in vegetable motifs, characteristically baroque.
The altar piece presiding in the central nave displays detailed workmanship and rich ornamentation which are conveyed by the painted designs imitating a curtain. The floor sections all fit together naturally, no nails have been used and the structure blends in with the wooden beams.