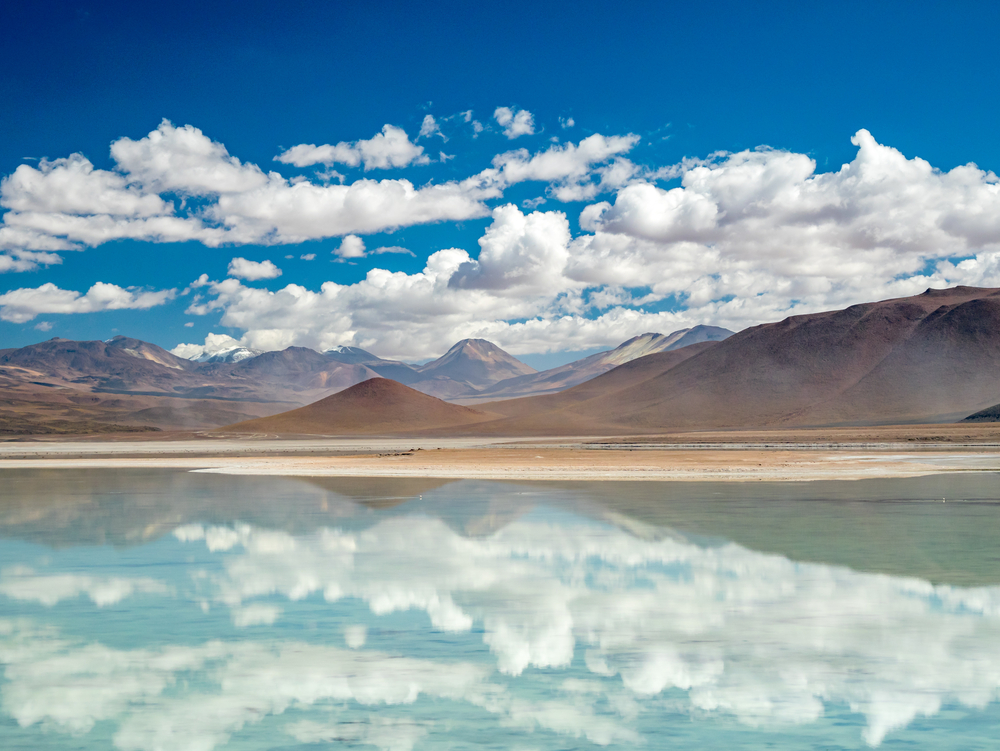 The Atacama Salt Flat is the biggest one if its kind in Chile, covering an area of more than 3,000 km². The air is extraordinarily dry, and as a result, absolutely transparent. Because of this, the other end of the salt flat, some 70 km. away, can be seen easily. However, this transparency does make it difficult to judge distances.

Below the salt flat, hidden by a thick and irregular layer of salt blackened by the desert dust, lies a lake which contains the largest reserve of lithium in the world. This mineral is used in some high technological industries and is exploited in the southern sector of this site. In some places, the crust has been opened to give way to small lagoons, which are a favourite habitat for water birds, particularly flamingoes, coots and guallatas.

Situated 56 km. to the south of San Pedro de Atacama, the most important of these lagoons is the Laguna Chaxa, which forms part of the Los Flamencos National Reserve. Its surface is partially covered with salt, and on its shores grows flora which have adapted to the salt surroundings and the desert climate, with species such as brea, cachiyuyo, Ephedra breana and salt grasses. The fauna includes both Chilean and Andean flamingoes, Andean plover, Baird’s playero, Andean seagulls, colegiales, pequenes and a species of swallow.

The surroundings of the salt flat also offer a large number of attractions. On the northern and western sides is the Cordillera de la Sal (salt cordillera): a chain of twisted, dinosaur-shaped hills through which the road from Calama to San Pedro runs and the entrance to the salt flat aswell.

In the past, this was the bottom of a lake. The horizontal layers of sediment and rock, which date back to the Tertiary Age, some 23 million years ago, were pushed and folded by the same movements of the Earth’s crust which raised the Andes Mountains, leaving some layers in a vertical position. The wind and the rain have completed the modelling of the landscape.

The name ‘salt cordillera’ derives from the fact that its rocks possess a large quantity of calcium sulphate, which makes them appear as though they have been sprinkled with salt.