Where to go in Valparaíso? 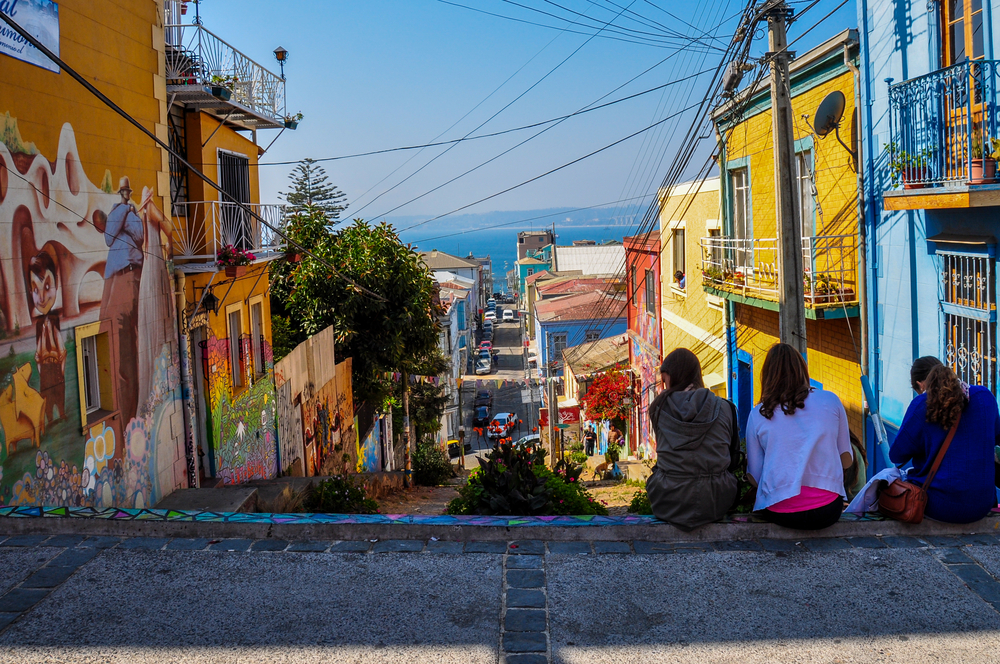 National Congress
Located in the El Almendral barrio by the port, this is made up of the Cámara de Diputados, (Chamber of Deputies) with 120 members, and the Senado (Senate), consisting of 49 members.

On March 11th 1990, the National Congress restarted its activities after more than 16 years in recess; for this re-opening it had been moved from its old seat in Santiago to a building specially constructed in Valparaíso to serve as the new seat of legislative power.

This architectural work was created by the Chilean architects Juan Cárdenas, José Covacevic and Raúl Farrú. The floor area of the building is 60,000 square meters.

Plaza Victoria
Around this square stand the Iglesia Catedral, the Biblioteca Severín, and the Club Naval building.

Plaza Sotomayor
The square is located opposite Muelle Pratt and the Estación Puerto railway station. In the center stands the Monumento a los Héroes de Iquique, previously called Monumento a la Marina Nacional, which was inaugurated on May 21st 1886. The base of the monument is made of stone brought from Rigoleto, Italy.

Plaza Aníbal Pinto
This square brings together a series of ancient and modern buildings, surrounded by interesting narrow streets. It was declared a zona típica by the Consejo de Monumentos Nacionales. The oldest buildings are the Joyería Klickmann and the Café Riquet.

Prominent in the center of the square is the Neptune Fountain, installed in 1892, which represents the sea god riding on the backs of two dragons, which he drives with a great trident, while water spouts from their mouths. From this square you can go up Cerro Concepción and Cerro Alegre.

Museo de Historia Natural de Valparaíso
The Natural History Museum is on Calle Condell N°1546; it was founded in 1878 by Don Eduardo de la Barra, and since 1929 it has formed part of the Dirección de Bibliotecas, Archivos y Museos (DIBAM). The building in which it is housed was declared a national monument in 1979.

Museo de Bellas Artes de Valparaíso
On the July 19th 1979, this museum was declared a national monument. It is located on Paseo Yugoslavo on the Cerro Alegre. It was built in 1916 and has a floor area of 2,100 square meters. There is a collection of paintings which dates back to 1893.

In this museum collections of both Chilean and European art are on display. Of particular significance are works by Rousseau, Boudin, Henry and the Chilean painters Pedro Lira, Juan Francisco González, Cosme San Martín, Valenzuela Puelma, Camilo Mori and others.
You can get to the museum by the El Peral ascensor.

Museo Naval y Marítimo
Located on Paseo 21 de Mayo; you can get to this museum by using the Artillería ascensor or by car from Plaza Wheelwright. From here you should go up Carampangue until it connects with Artillería. It is open to the public from Tuesday to Sunday, 10:00 – 17:30 hrs.

The Museum, which preserves relics and testimonies of the formation and evolution of the Chilean Navy from 1818 to 1880, is currently housed in the Centro de Cultura Naval y Marítimo.

Paseo 21 de Mayo
This is considered one the most attractive viewpoints of the city, with a view over the whole of Valparaíso Bay.

The principal access is the Artillería ascensor, but it is also accessible by walking up Calle Artillería or Calle Orompello.

Huge numbers of both inhabitants of the city and visitors come here every 31st December to attend the spectacular Año Nuevo en el Mar with which the port welcomes the arrival of the New Year.

Paseo Muelle Barón
With the opening of the Paseo Muelle Barón in May 2002 by the President of Chile, Ricardo Lagos, the desire to unite the port and the city was accomplished. Access to the waterfront had been an aspiration of the citizens of Valparaíso ever since public access to the Costanera had to be closed in 1980.

Nowadays, the Paseo Muelle Barón is a place to relax, offering a complete panoramic view of the city.

Paseo Muelle Prat
This walkway is opposite the towers of the Superintendencia de Aduanas (Customs) and the Capitanía de Puerto (Harbormaster’s Office). It constitutes one of the main attractions of the area where the tourist can watch port operations: vessels maneuvering inside the breakwater, mooring and unmooring; and the loading, stowage and discharge of cargo.

El Puerto
The port is located opposite Muelle Prat. It has a frontage of 1,000 meters and encloses the basin, protecting it from the storms which blow from the north. The port was planned in the 1930s and consists of the breakwater and the berths.

La Aduana
The Customs House was constructed in 1854 in the American Colonial style and is painted red. The rooms inside the building are used for the transaction of the day to day customs business of the port.

Iglesia Catedral de Valparaíso
The cathedral was completed in 1948. It was destroyed by an earthquake in 1971, and subsequently rebuilt, however a part of the original structure, first conceived in 1917, was lost. New repair works were started in 1975, but the earthquake of March 3rd 1985 caused further damage. Reconstruction began immediately after this earthquake, starting with the bell-tower, which was rebuilt using lighter material. Then the facade was repaired, reverting to the original plan.

The 1906 earthquake made repairs essential, when the changes which can now be seen were effected. The tower, which was originally 25 meters high, was lowered. Irreparable damage to some of its ornamentation meant that changes were made to the facade.

It was seriously affected by the earthquake of July 1971, just when remodeling work was beginning in order to restore its original appearance.

Laguna Verde
This lake lies 18 km from Valparaíso. It has a beautiful long beach with access via the Quebrada Verde road. This resort generally has good weather and has hosterías, camp sites, shops and restaurants where you can enjoy typical fish and seafood cuisine.