Where to go in Iquique? 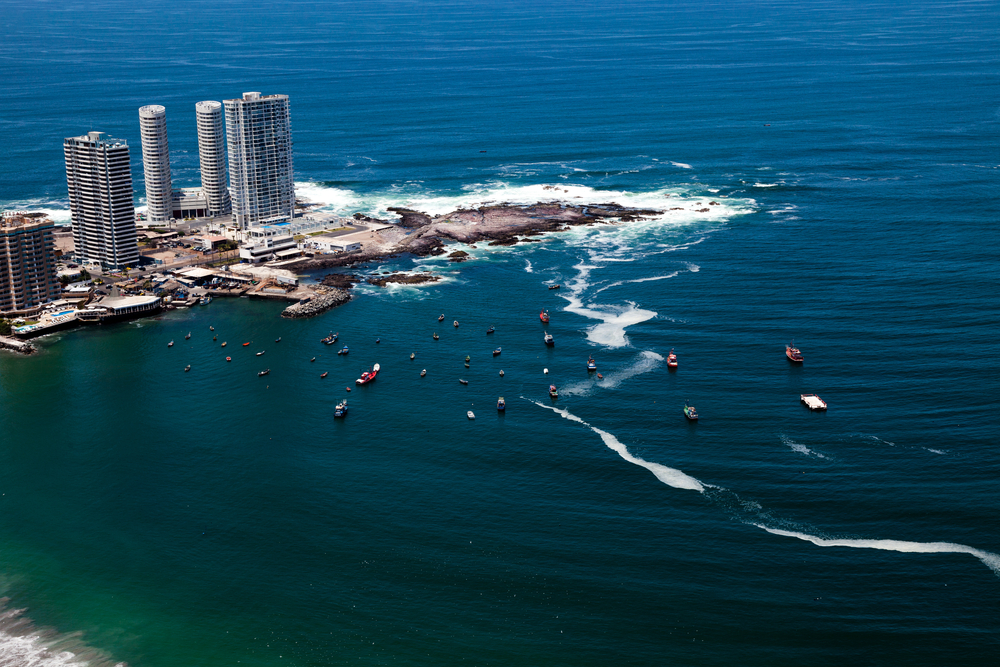 Costanera Walk
The waterfront promenade is 4 km long, stretching from Bellavista Beach to the neighborhood of Huantajaya Beach, to the south of Brava Beach. It is made up of a wide-open strip, lined with gardens, children’s games, fountains and beaches.

Sailor Point
Puntilla del Marinero is a little point in the northern sector of the Costanera. Here, sited on a rocky promontory where the waves break thunderously, stands a massive bronze statue in honor of the Navy. From here you can see the buoy which marks the site of the sinking of the Esmeralda. There is also an extensive view of the city.

Esmeralda Buoy
The Esmeralda Buoy is located in the northern part of the costanera, close to the Main Square of Iquique. The buoy marks the site of the remains of the Esmeralda boat, which was sunk during the Naval Combat of Iquique, on May 21, 1879. Every year on this date, important public figures gather to pay homage to the heroes of the Navy. There are boats along the shore which will take you out there.

Baquedano Street
This is an avenue with palm trees growing down the middle, and houses built in the North American Georgian style between 1880 and 1920. There are important buildings on the street, such as the Regional Museum and the Astoreca Palace, and they all have much in common: they are built of oregon pine and the construction technique is of a simple framed building. This street was declared a Zona Típica in 1977 and you will also find the Collahuasi Art Saloon, an important place in the city with monthly exhibitions from nationals and international artists.

Regional Museum
The Regional Museum is in Baquedano St. 951 (between Zegers and Wilson), and dates from 1892. It was built by the nitrates industrialist Astoreca in oregon pine, and at that time was a family residence. Up until 1987, it served as the Courts of Justice, and now it contains important collections of items of indigenous peoples, objects from the Andean Plateau and a room devoted to photographs. There are also some interesting mummies from the Chinchorro culture and you can visit their website (only spanish) for more information.

Arturo Prat Square
This is the Plaza de Armas (main square) of the city and is the main point of reference for visitors. On one side of the square is the Municipal Theater, and in the center is the Clock Tower. The trees and palm trees in the square have been there for many years.

Clock Tower
The Clock Tower decorates the center of the Arturo Prat Square, surrounded by ancient trees and palm trees. It was constructed in 1877 and is symbolic for the local inhabitants. The structure is of oregon pine and the clock for which it is named is at the top.

Spanish Center
Located in front of the main square, is one of the most beautiful and best preserved buildings of the city. It was built in 1904 in the Moorish style, with an ornamented facade and projecting balconies. Nowadays, it is a traditions Spanish food restaurant and a place were important acts for the Spanish community take place.

Histor Quarter
In the Historic Quarter you can see the roofed passenger pier, which has been declared a National Monument. From there you can take a trip round the bay, offering views of the city of Iquique in all its glory. Next door is the Old Peruvian Customs Building (Ex Edificio de la Aduana Peruana).

Naval Museum
The Naval Museum is only a few blocks from the Arturo Prat Square, on the building the belonged to the Peruvian Government and Customs House. It was built in 1871 and, nowadays, it contains valuable relics of the Naval Battle of Iquique, fought in 1879.

Astoreca Palace
The Astoreca Palace, a mansion built in 1904, is on Baquedano St. corner of O’Higgins. The architecture is inspired by the Georgian style and the principal material used in the construction was oregon pine, imported from Canada. Today it contains an exhibition of furniture used in that period and it isnow the most important cultural center in the city, under the care of the University Arturo Prat. Click here for more information.

Municipal Theater
The Theater was inaugurated as an opera house on January 1, 1890, at the time of the boom in the nitrates industry. It stands on the main square and its majestic interior makes it one of the principal attractions of the city. Declared a National Monument, it was built in neo-classical style and has a wood structure. The main types of presentations given in the theater were opera, zarzuelas (Spanish operetta), plays and cultural activities.

Employees’ Protection Society of Tarapacá
It stands on the Plaza of Armas, beside the Municipal Theater, and its importance stems from the fact that it was one of the first buildings in the country housing a workers’ organization. The building was constructed between 1911 and 1913 and still is an important gathering place for the member of the Society.

Central Station
The Central Station stands near the main square, together with the Old Railway Administration. It was built in 1883, in the classical Georgian style used in British colonies, when the existing train service passed into the hands of J. North.

Catedral de Iquique
The cathedral is a few blocks from the Central Station, along Labbé St. between Bolivar and Esmeralda. The three naves of the interior display its Corinthian style, and it was constructed to replace the original church, which was destroyed by a fire in 1883. The church became a cathedral with the creation of the bishopric of Iquique in 1929. It was declared a National Historical Monument, together with its parochial buildings, in 1989.

Dreams Iquique Casino
The Casino stands beside the sea, close to the commercial port, in Balmaceda Av. 2755. It is open every day of the year, and on weekends dinner – dances with live orchestra are held in some rooms. There is a large gaming room with roulette tables, punto and banca, black jack and one hundred gambling machines.

Zofri
This is the biggest Freezone in South America, covering 240 hectares full of warehouses for the storage of the many varied goods. There is also a mall for the retail purchase of perfumes, electrical appliances, electronic goods, computer equipment, cigarettes, toys, etc.