Where to go in Concepción? 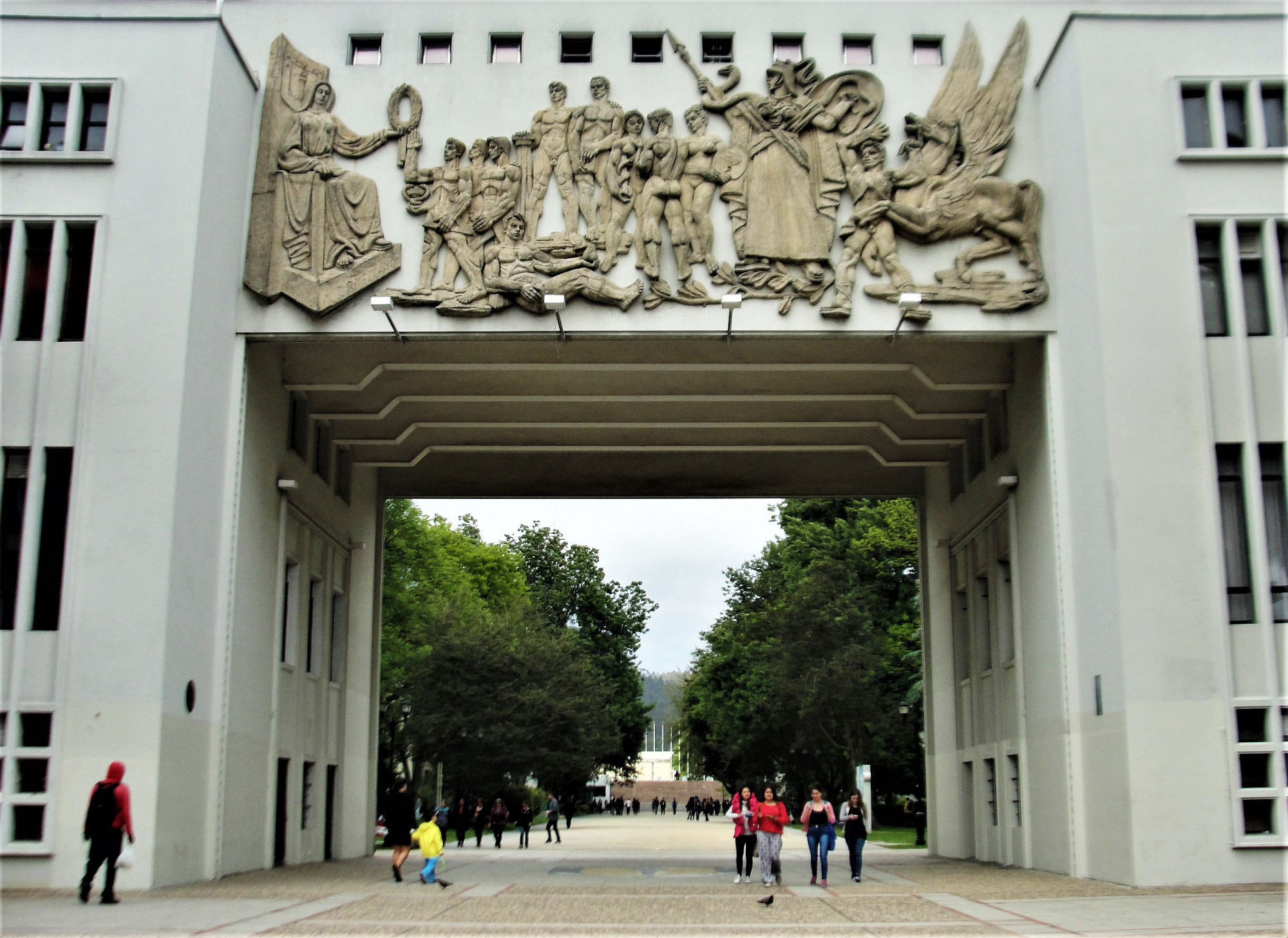 Catedral de la Santísima Concepción
The cathedral was built between 1940 and 1950 in the Romantic style. An image of the Immaculate Conception dating from the 17th century is preserved in an altar.

Museo Catedral de la Santísima Concepción
The museum houses priests’ clothing, chalices and missals. There is a 17th century gold-plated Venetian monstrance. There is also an ivory crucifix with inlaid silverwork donated to the ancient cathedral by Felipe II.

Pinacoteca de la Universidad de Concepción
This art gallery houses the most complete collection of Chilean paintings, made up of works from different ages. The mural ‘Presence of Latin America’ hangs in the entrance foyer.

Galería de la Historia
Here you can see a complete view of the region’s history through dioramas – carved figures laid out in atmospheric settings. There will be a sculpture and modeling workshop between April and December.

Mausoleum of General Don José María de la Cruz
This mausoleum was erected in 1879, making it one of the oldest exhibits of the Museum of Concepción. As well as this, it holds the remains of General José María de la Cruz Prieto, who was a very distinguished military man who, amongst others, contributed greatly to the country’s campaigns for Independence.

Museo de Historia Natural de Concepción
The museum displays the history of Concepción in documents and models. Occasionally there are exhibitions on the environment and anthropology.

Hualpen Museum and Park
This museum, declared a national monument, was the house of Pedro del Rió, a layman who donated the house to the city of Concepción for its conservation.

Restos muros de piedra convento de La Merced
This is a Historic Monument and is located in Calle Freire, close to the Parish of Merced.

Mercado Municipal de Concepción
This market is picturesque and entertaining, and sells handicrafts, florists and regional foods. Its size is 3,600m2.

Paseo Peatonal de Concepción
This is a walk around the center of the city. It’s attractive and on the way around you can see the vast quantity of shops.

Vega Monumentalket
Inside there are numerous stalls selling food products, handicrafts, flowers etc, and the rural bus terminal is found at the back of this enclosure.

Barrio Universitario
This is one of the symbols of Concepción. Its main feature is the huge expanse of space and the cerro (hill) that surrounds it. It’s entrance stands out as being one of the most characteristic buildings of the city. There are numerous green spaces for sporting activities and the Duck Pool, with species such as black-necked swans, great bustards, and wild ducks.

Central Station Mural
This beautiful mural is found in the central hall of the Railway Station of Concepción. It’s 62 meters in length and 4.5 meters high, and shows the history of the city in sequence from the aboriginals until 1940.

University Campus of Concepción
Center of Higher Studies with access to the public. Here you can see the Arch of Medicine, the well-known Bell Tower, a monument to Enrique Molina Garmendía (founder of this center of studies in 1919), and the swan lake.

Parque Ecuador
This park lies on the side of Cerro Caracol, a meeting place for the families of Concepción, where there are games for children and sports grounds, a place where you can rest and enjoy nature. It comprises an area of around 1 km2.

Laguna Chica de San Pedro
A long lagoon surrounded by wooded hills. It has a municipal lakeside resort, sailing clubs and club Llacolén, where they practice rowing and other water sports.

Santuario de Nuestra Señora de La Candelaria
This is a modern church with a terrace and a lovely view of the lights of the city, which reflect in the river at dusk. The parish is home to the image of the Virgin of the Candelaria, donated by Governor Alonso de Ribera al Fuerte de San Pedro in 1603. She is worshiped with great veneration and a popular festival on 2 February of each year. (You can visit the sanctuary al year round from Monday to Sunday, from 09:00 until 21:00hrs.)

Cerro Los Perales
This cerro was declared a national monument. Bernard O’Higgins encamped here before attacking the defeated Spanish forces, who were waiting to board their ships. In this spot, declared a National Monument, the Liberator signed the Act of Independence of Chile, which was proclaimed the following day, 1 January 1888, en the Plaza of Concepción.

River Bío Bío
In the Mapuche language this river’s name means Huio Huio or ‘murmur of water’. It has been a historic river for excellence. During the Colony it was the frontier and the great stage for the War of Arauco, and in the struggle for National Independence, when it was witness to various battles between patriots and realists. Its most important function is to supply drinking water to more than a million people. Its higher course generates energy, perfect for sports such as rafting. Others take advantage of its deep waters for fishing and fish farming.

Cerros Caracol
Here you will find a mixed, native vegetations, including eucalyptus, pines and Australian Aromos. At its highest point it reaches 80m above sea level.

Cerro Amarillo
This cerro is located in calle Rozas on the corner of Rengo in Concepción. It was erected by the German colony in homage to the German Kaiser Bismark. It used to have two levels: the first, closed by an iron gate and the second, that provided a beautiful panoramic view of the city. The German Viewpoint is one of the most important historic sites due to its location and age. Nowadays, the forestation has covered its predominant views over Concepción, taking away its function as a viewpoint, but maintaining its status as an urban landmark through the collective memory of the people, and forming a recognized landmark to visit during walks around the Cerro Caracol.

Bío Bío Bridge
Also known as ‘old bridge’, inaugurated in 1937, it’s 1,419 m in length with two traffic lanes, and connects the city of Concepción with the towns to the south of the River Bío Bío.

Palace of Justice
Stands opposite the Plaza Tribunales, in the diagonal Pedro Aguirre Cerda. It was built in the year 1949 by the architect Orlando Torrealba. The building belongs to the architecture of the first modernism in the city. It’s made of concrete and is an isolated case of this form of urban sculpture.

Viewpoint Cerro Chepe
This urban site was erected in the times in which Guillermo Otto, administrator of the cemetery and the Cerro Chepe, wanted to transform the place into a footpath and viewpoint. It was built in parallel form to the cross found a few meters away.

Plaza Perú
This plaza is located between Chacabuco and Diagonal Pedro Aguirre Cerda. It was built in 1942. The buildings, built in 1942 and 1945, that make up the Plaza Perú form a unique collection of historic buildings in the city of Concepción. On its ground floor it has a porch named ‘The Porch of Plaza Perú’, one of the most important public spaces of the city. There is a beautiful water fountain marking its center. This plaza is one of the main urban landmarks of Concepción.

Railway Station
The station is situated in Avenida Arturo Prat 501. The architecture of the building is modernist, taking its inspiration from Loos and Le Corbusier, with white stuccos and of noble proportions. The tower forms an important urban landmark and looks out on calle Barros Arana, the main commercial center of the city. Inside there’s a large foyer that houses the prestigious mural ‘History of Concepción’, by Gregorio de la Fuente.

Parque Jorge Alessandri Rodríguez (Coronel County)
A forested area of 11 hectares created by the company CMPC to provide information on productive and ecological aspects of native woodland and forestry in Chile. It’s divided into 3 sections: an educational park, a cultural amphitheater and a native wood. You can visit the park throughout the year, and guided tours and transfer in a park bus are included. The tour is recommended for those older than 11 years of age.