Volcanoes in the Araucanía Region 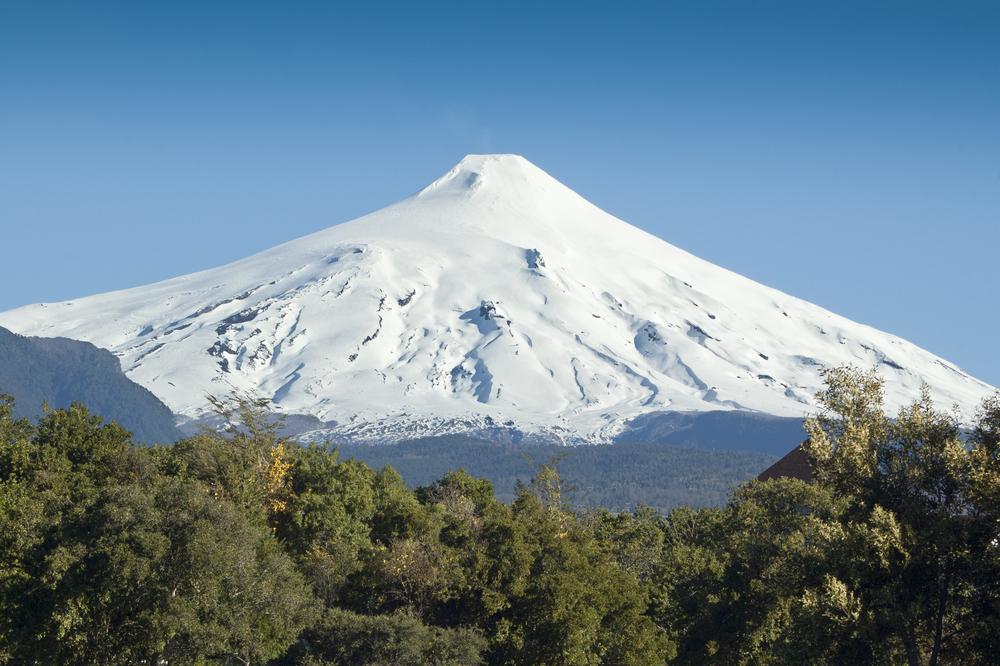 Volcán Villarrica
This volcano reaches an altitude of 2,847 meters and the summit is covered by a 40 km² glacier. It is active and its crater, only 200 meters in diameter, contains a lake of lava at 1,250ºC, with permanent vents of steam and gas. It stands at the north western end of a volcanic chain together with Cordillera, El Mocho, Quetrupillán, Quinquilil and Lanín volcanoes. There have been 59 eruptions since records began and the biggest in the last century were in 1908, 1920, 1948, 1949, 1963, 1971 and 1984-85.

There are volcanic caves which will give you an idea of its physical make-up. They run some 700 meters into the mountain and are fitted with lights and steps for the convenience of visitors. There is a Vulcanological Información Center and a coffee shop nearby. They are open all year round and a charge is made for admission. The tour of the caves is made with a specialized guide and with due safety precautions.

Volcán Lanin
This volcano is 3,774 meters high and is inactive, with no recorded eruptions.

Volcán Llaima
This volcano is 3,215 meters high. It is active, and its two peaks both have permanent steam and gas vents. The larger crater is 350 meters in diameter and is surrounded by 14 km² of glacier. There have been 49 recorded eruptions, the biggest being in 1927, 1957 y 1994.

Volcán Sierra Nevada
This is an open volcanic caldera of 3.5 km diameter, facing west, and rising to a height of 2,074 meters. There are hot springs within the caldera.

Nevados de Sollipulli
This volcano, 2,282 meters high, is dormant. The glacier is up to 600 meters thick.

Quetrupillán
This volcano rises to a height of 2,360 meters and is presently dormant. It is an extensive volcanic complex, and the eroded lava in the valley of the Río Palguín has given rise to waterfalls such as Salto de La China and El León.

Volcán Tolhuaca
This volcano rises to 2,806 meters. It is active, with a permanent vent of gas and steam at the north west of the summit, and there is a glacier covering 5 km². Eruptions were recorded in 1876 and 1940.