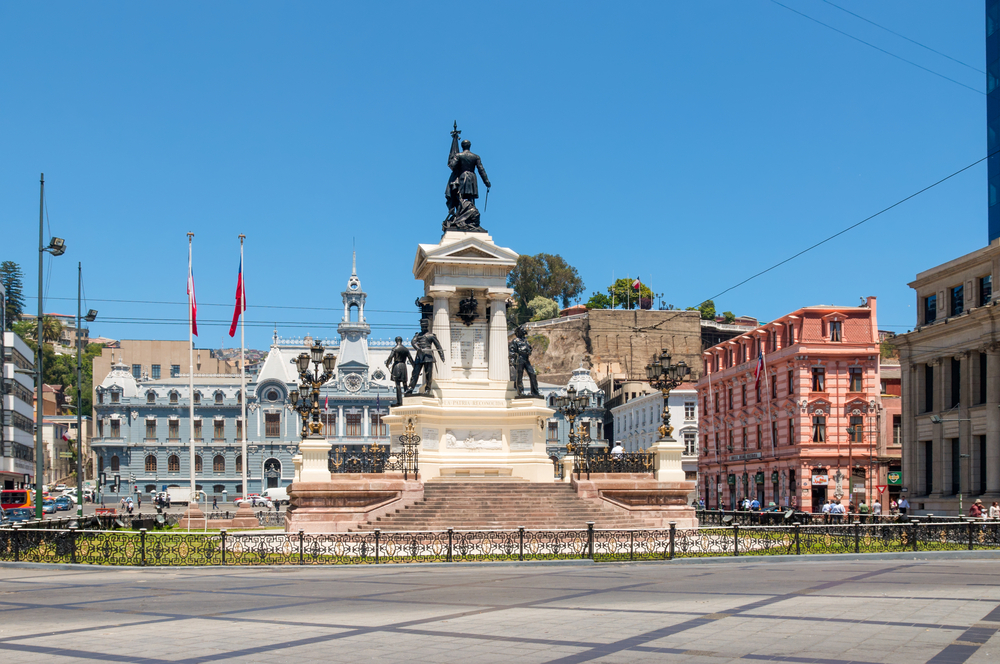 The city squares form part of the historical and architectural heritage of Valparaíso, which is what gives it its cultural importance.

This square, which unites the coastal plain to the hills that rise behind it, typifies the spirit of the city. It was declared a protected zona típica in 1976.

It was originally named La Plaza del Orden, and has undergone few changes in the last 100 years.

Prominent in the center of the square is the Neptune Fountain, installed in 1892, which represents the sea god riding on the backs of two dragons which he drives with a great trident, while water spouts from their mouths. From this square you can go up Cerro Concepción and Cerro Alegre.

This is thought to be the earliest square in Valparaíso. Originally called the Plaza de Armas it later became the Plaza De La Municipalidad. It was finally given its present name in honor of the hard-working Intendente (Regional Governor) of Valparaíso, Francisco Echaurren, who made innumerable improvements to the city in the years following 1870.

The square is in the port district, which is the old heart of the city. Around it you may find the Mercado Puerto, the Iglesia de La Matriz, the Cordillera ascensor and a series of small businesses typical of the port area.

The square is located opposite Muelle Prat and the Estación Puerto railway station. In the center stands the Monumento a los Héroes de Iquique, previously called Monumento a la Marina Nacional, which was inaugurated on May 21st 1886. The base of the monument is made of stone brought from Rigoleto, Italy.

On the top of the monument is a statue of Arturo Prat. Its central part displays the figures of Ignacio Serrano and Ernesto Riquelme on the front panel, and Juan de Dios Aldea and a sailor on the back; all the heroic comrades of Prat, who shared in his glorious sacrifice.

On the four sides of the main body of the monument, the naval battles of Iquique, Punta Gruesa, Angamos and Arica are carved in relief, with the dates on which they were fought. The front and rear of the central block bear the legends: “A sus héroes mártires”, “La Patria reconocida”. (“To its heroic martyrs”, “Their grateful country”)

Below ground level, there is a solid dome enclosing niches which hold the remains of Prat, Condell, Serrano and Aldea, and niches for the commanders and officers involved in the various battles in which they took part. The monument is surrounded by a garden and a decorative iron border. una valiosa verja de hierro.

One of the biggest and newest squares of Valparaíso, it was opened on February 12th 1966, and the central part has been re-modeled. There is an important memorial to General Bernardo O’Higgins. Towards the Calle Uruguay sector you will find the Valparaíso Municipal Theater.

From its earliest days, this square became a center of attraction in the city, where antiques, stamps and many other items of interest to collectors can be found.

This square, which used to be named Plaza De Orrego, has been a public space for more than 200 years, with avenues of tall, leafy trees.

It was given its present name on Wednesday, May 10th 1922, on the occasion of the visit of General Enrico Caviglia of Italy, victor of Venetto, who was given a particularly warm welcome by the numerous residents of Valparaíso of Italian descent.
This park was re-inaugurated by the present mayor of the city on June 6th 2000, after a restoration program.