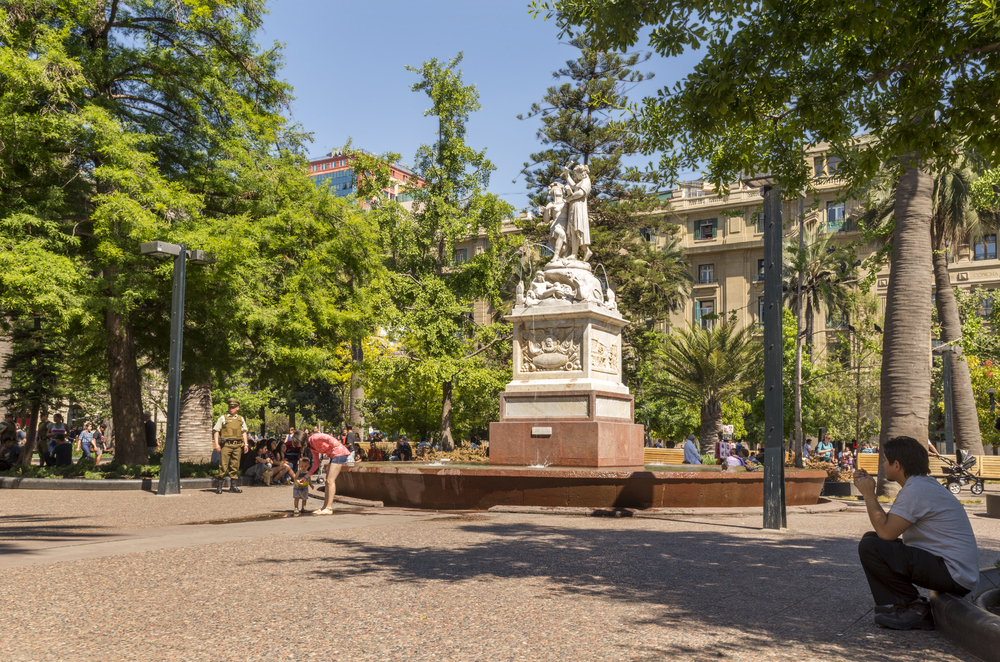 Plaza de Armas
Around the Plaza de Armas, as in all Spanish–style cities, stand the Ayuntamiento and the Cathedral. They are seconded by the Museo de Historia Natural and an old market. This was the center of the original layout of the city.

As in many parts of the world, open air music and theater are on offer for the pleasure of passers by, although here activities are restricted to Thursdays and Sundays.

Plaza de la Constitución
This is a large public space in front of the north side of the Palacio de La Moneda. Here, every other day between 10:00 and 10:30 hrs, takes place the spectacle of the Changing of the Palace Guard. An important feature is the monument to Diego Portales.

Around the Plaza stand a number of important buildings. On the corner of Teatinos and Moneda streets is the Ministerio de Hacienda (1933) and at Teatinos and Agustinas stands the Hotel Carrera (1934), both works of the architect Smith Solar. In Calle Agustinas you should note the Diario La Nación building, ond on the east side of the Plaza (Agustinas corner of Morandé) stands the imposing monolith of the Banco Central (1927).

You can take a bus in Calle Teatinos at the corner of Agustinas, or walk down to the corner of Teatinos with the Alameda, where there are not only buses but also La Moneda metro station.

Plaza Italia
This Plaza contains a monument symbolizing the friendship of the Italian and Chilean peoples, dating from 1910. An engraved plaque reads: ‘A la amistad Italo-Chilena’ (To Italian-Chilean Friendship). The ltalian Institute for Foreign Trade presented the marble decoration of this statue symbolizing the friendship of our peoples to the Italian colony in Chile and the City of Santiago. The Italian sculptor Roberto Negri was responsible for casting this bronze sculpture representing a standing angel with a torch as a symbol of the future, and a lion representing the Chilean people bursting its chains to achieve independence.