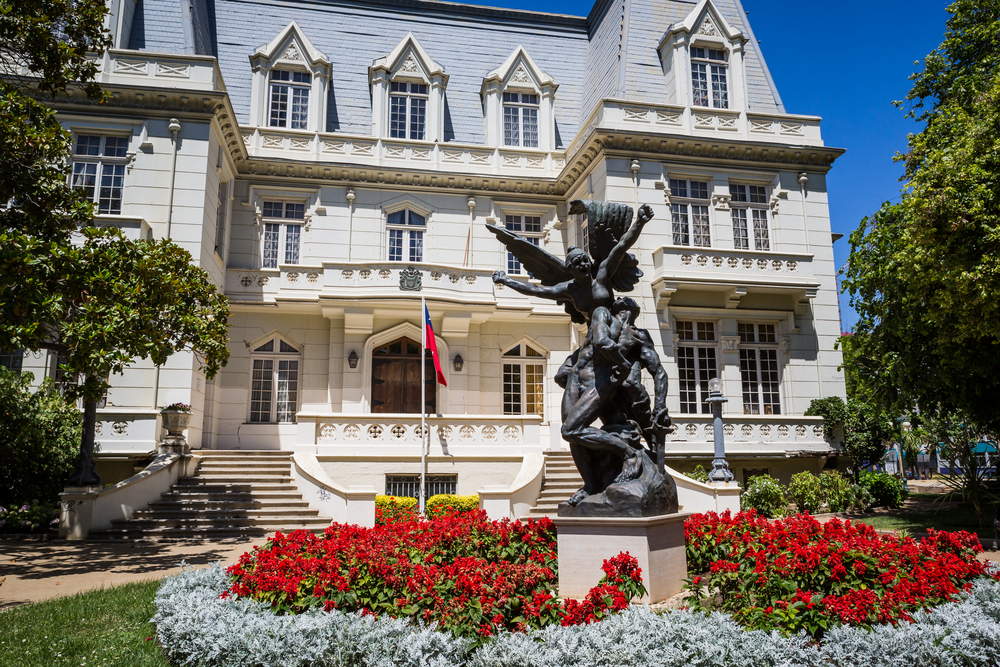 Valparaíso is considered to be a city and port of history and art.

The Natural History Museum is on Calle Condell N°1546; it was founded in 1878 by Don Eduardo de la Barra, and since 1929 it has formed part of the Dirección de Bibliotecas, Archivos y Museos (DIBAM). The building in which it is housed was declared a national monument in 1979.

The first owner, Santiago Lyon, was the son of a Scotsman, George Lyon, whose ancestry can be traced back to the Kings of Scotland.

The date of construction is estimated to be the year 1881, and the design is of a mansion with an elegant facade, and a rather victorian air; the decorated interiors are well cared-for. The building is massively constructed, with vaulted cellars which display high technical quality. The interior is characterized by large rooms enclosed by walls with baroque ornamentation.

The facade consists of ornamental supporting columns which border a wide entrance staircase. The cellar, which is of great architectural interest, with vaults and walls made of brick and stone, is presently the home of the Galería Municipal de Arte.

Museo Municipal de Bellas Artes
The Museum of Fine Arts was declared a National Monument on July 19th 1979. It is located on Paseo Yugoslavo and Cerro Alegre. The mansion was built in the year 1916 by the architects Renato Schiavon and Arnaldo Barison by order of the Zanelli family in an Art Nouveau style. It was subsequently acquired by don Pascual Baburizza and then by the Municipality of Valparaíso, in order to establish the Museo Municipal de Bellas Artes there, which opened on July 8th 1971.

In this museum collections of both Chilean and European art are on display. Of particular significance are works by Rousseau, Boudin, Henry and the Chilean painters Pedro Lira, Juan Francisco González, Cosme San Martín, Valenzuela Puelma, Camilo Mori and others.

Access to the museum is via the El Peral ascensor.

Museo Naval y Marítimo
On March 5th 1893, the president, Admiral Jorge Montt Alvarez, opened the Naval School building. It functioned as a school until June 24th 1967, when it saw its last ceremony performed, after having served for the training of generations of officers over 74 years.

Located on Paseo 21 de Mayo; you can get to this museum by using the Artillería ascensor or by car from Plaza Wheelwright. From here you should go up Carampangue until it connects with Artillería. It is open to the public from Tuesday to Sunday, 10:00 – 17:30 hrs.

Casa Museo Mirador Lukas
This museum pays tribute to Renzo Pecchenino “Lukas”, a great journalist, publicist and draftsman who was able to express the identity and customs of the inhabitants of Valparaíso with his paintbrush and pen.

Casa Museo La Sebastiana
This house belonged to the Spaniard Sebastián Collado, who began the construction of a four-story building. When he died, he left it unfinished and his heirs did not continue with the work, which remained abandoned for several years. Later, Pablo Neruda (1904-1973), Chilean poet and winner of the National Art Prize in 1945 and the Nobel Prize for Literature in 1971, rescued it and opened it with his friends on the September 18th 1961. For Neruda, it was a house to celebrate New Year’s Eve at the port; from here he was able to watch the boats and fireworks.

La Sebastiana, built on five floors, has an exceptional view of the bay of Valparaíso and its surrounding hills. The house was opened to the public as a museum in January 1992.

Museo a Cielo Abierto
This museum is located in Pasajes Quimera, Pasteur, Rudolph and Ferrari, and is the result of a combined effort of the Municipality of Valparaíso and the Universidad Católica de Valparaíso. The aim was to promote urban and artistic values, with the Institute of Art of the UCV taking charge of the task.
The museum consists of a series of closely juxtaposed murals, which form part of a path along the mountainside of the Cerro Bellavista. This not only brings works of art into the daily life of the neighbors and inhabitants of the hill, but also creates the possibility of an interesting new walk for tourists in the city.

Museo del Mar Lord Thomas Cochrane
Located in a large, old, colonial-style house built in 1842 by the Englishman Juan Muat, who installed the first observatory in Chile in one of the buildings.
The house is built on level ground on the edge of a cliff and from the terrace you can enjoy an exceptional view of the city.

There are ship models on permanent display and temporary exhibitions all year round.

It is located in Calle Merlet N°195, Cerro Cordillera. You can access the museum by using the Cordillera ascensor (Calle Serrano), Subida Castillo. Visits are by appointment only: call (56-32) 939486.