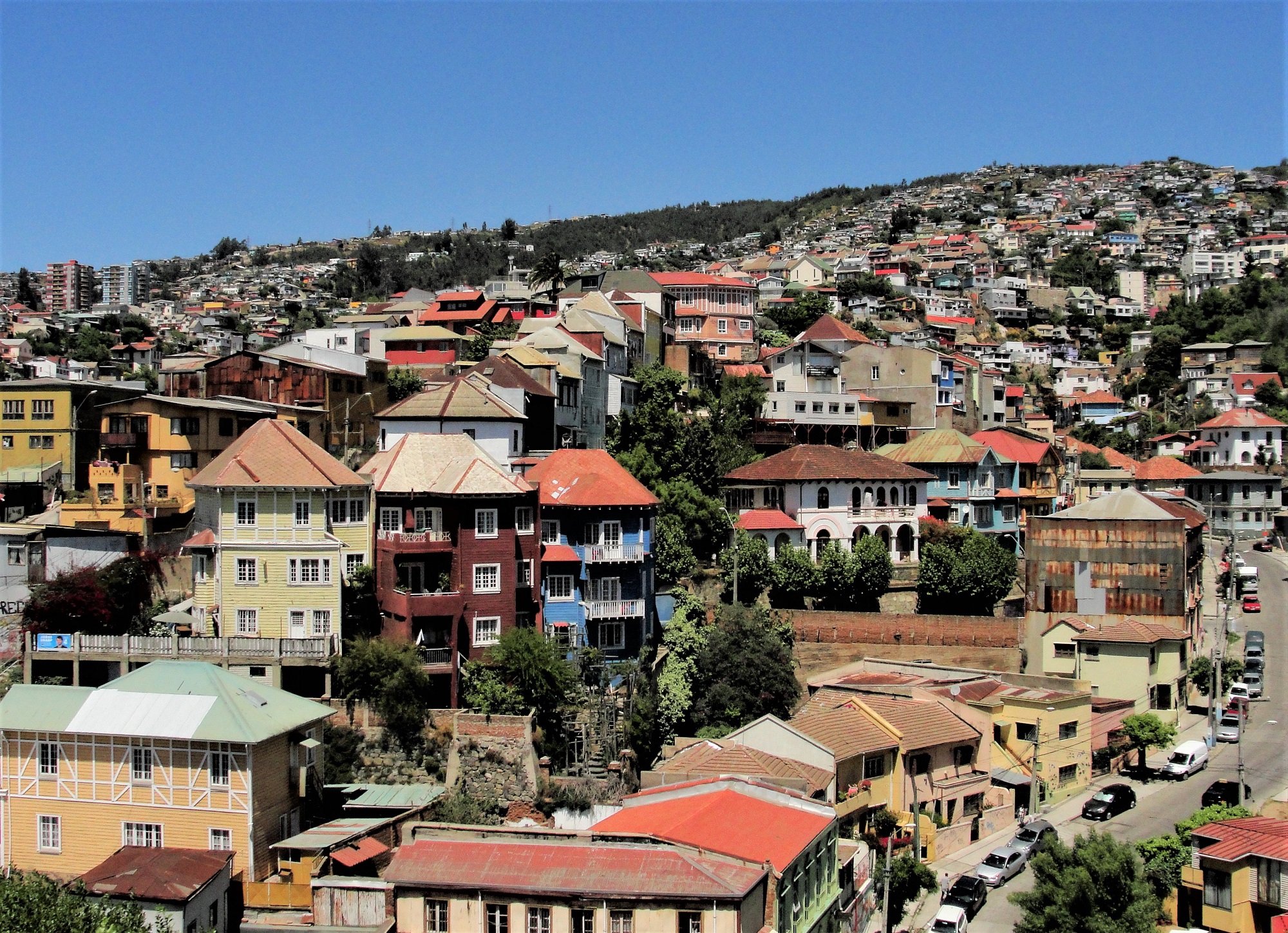 The chain of 45 hills surrounding the bay is one of the greatest attractions of the city, since most of the buildings constructed on the slopes have been adapted to the topography of the place with steep steps and narrow alleys.
Because it was mainly English, French and German immigrants who settled the area, they created an environment charged with varied shapes and colors. Some of the most important hills are:

Cerro Alegre
The English businessman, William Bateman, was the first to buy a property on the hill, where he built a house.

His idea was quickly copied by his fellow countrymen, who had arrived as immigrants to the city, and soon a residential district was established with houses of a standard of construction which was superior to that usual for the period. The houses also had gardens which helped to beautify this first residential area on the hill.

The colors of both the architecture and the gardens gave the hill the name Cerro Alegre.

Cerro Artillería
The name comes from the artillery barracks which are situated at the top of the hill. The attractions to be found there are the Edificio Vicealmirante Luis Uribe Orrego, Museo Naval y Marítimo, Paseo 21 de Mayo, the Artillería ascensor and the Antigua Escuela Naval.

Cerro Barón
Initially, this hill was called the Morro, but then it received the name Cerro Barón because Ambrosio O’Higgins received the title of Barón de Vallenary. The town council of Valparaíso decided to celebrate this event by giving the hill the name Barón. The Iglesia de San Francisco stands on the hill.

Cerro Bellavista
From this hill there is a panoramic view of the whole of Valparaíso Bay and its surrounding hills, since this hill stands at the central point of the chain. It is for this reason that is has been given the name Bellavista.

The attractions that can be found on this hill are the Cristo Redentor, Museo a Cielo Abierto and the Espíritu Santo ascensor.

Cerro Concepción
The first construction on the hill dates back to 1678 when a military redoubt was built, made of adobe, on the orders of Governor Henríquez. In 1822 the English immigrants William Bateman and John Martin came to live here. They were later joined by German and French immigrants, who started to build houses which reminded them of their distant homelands: beautiful, comfortable houses of two floors, with bright, colorful front gardens.
In 1856, a gas street-lighting system was inaugurated, and 15 streetlights were installed in Cerro Concepción. On December 1st 1883, the Concepción ascensor was opened. The wooden carriages are worked by counterweight, using a hydraulic system operated with tanks of water located on either side of the run.

Cerro Cordillera
This hill is located in the center of the city, and on it are the remains of the fortress Castillo San José. Calle Serrano, previously called Planchada, starts here: it became one of the most important streets of the city, where businesses and luxurious establishments could still be seen until the middle of the 20th century.

Cerro Florida
The buildings on this hill date back to the 19th century. Among its attractions are the Florida ascensor and Calle Mena and the Pablo Neruda La Sebastiana Museum & House.

Cerro Santo Domingo
The name comes from the church and convent of Santo Domingo which stands near the Iglesia La Matriz, home of the Padres Jesuitas.
The building of the current Escuadrón Logístico de Carabineros is also located on this hill.

Cerro O’Higgins
This hill is also known by the name of Las Zorras, due to the fact that in the past the English immigrants used to practice their favorite sport here, fox hunting, as there were plenty of foxes on the hill.

However, at the beginning of the 20th century, the hill received the name by which it is known today, Cerro O’Higgins, after a monument of Bernardo O’Higgins was built on the hill.

Cerro Playa Ancha
The origin of the name Playa Ancha for this hill may derive from a comparison of its broad top with the expanse of a beach.