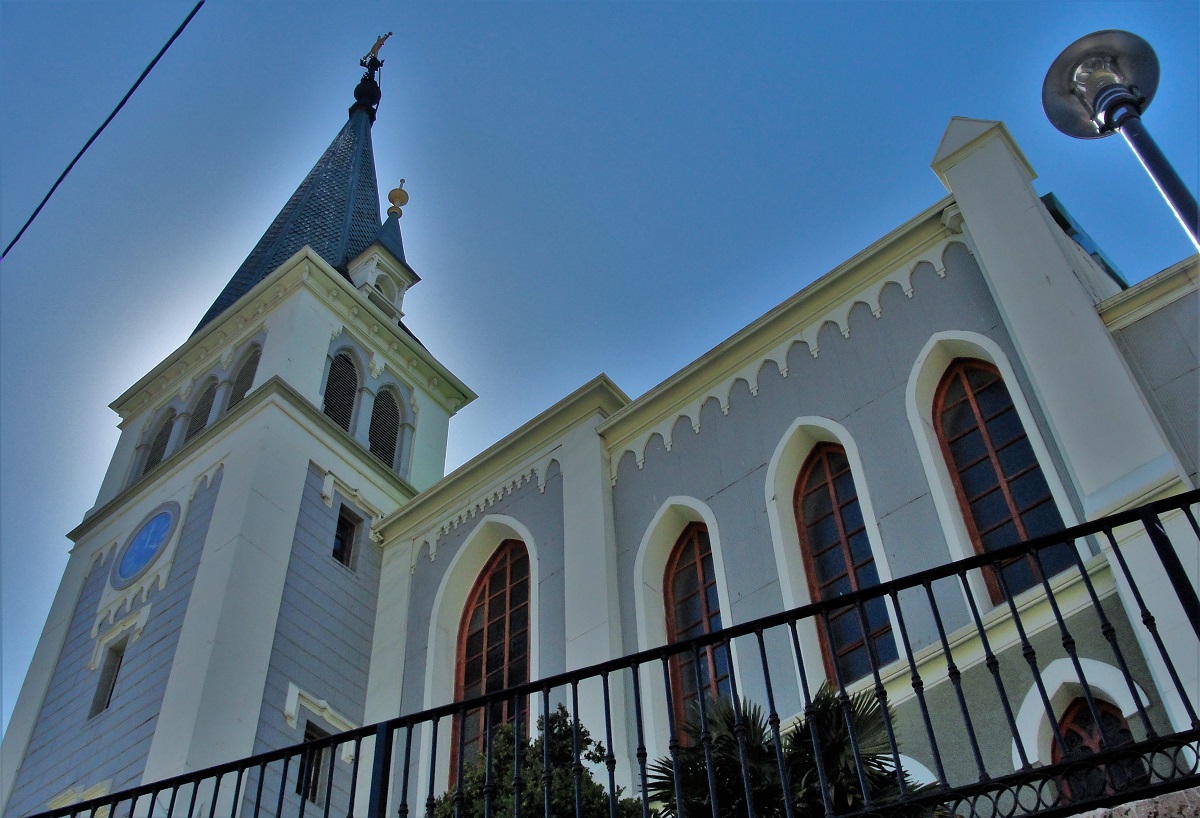 Because of the religious nature of the inhabitants, the churches of the city were of great importance from the time it was founded, throughout the period of Spanish colonial rule and the early years of the republic.

The collection of churches which exist today may not be very numerous, but they form an interesting part of the cultural heritage still preserved in Valparaíso.

Their great architectural value has meant that they form a historic monument within the city.

This Anglican church was declared a National Monument in 1979. It belongs to the British community of San Pablo and stands on the Cerro Concepción. Built in 1858 by the engineer William Lloyd, it was the second protestant church in Chile.

The architecture is sober, with elaborately worked wood; in a strange way it resembles an upturned boat. There is no tower, nor is it surmounted by a cross, due to the fact that at the time when it was built there was no freedom of conscience.

The beautiful stained glass windows represent episodes from the Bible, and the Ten Commandments are painted up on two boards, one on either side of the high altar.

The cathedral was completed in 1948. It was destroyed by an earthquake in 1971, and subsequently rebuilt, however a part of the original structure first conceived in 1917 was lost. New repair works were started in 1975, but the earthquake of March 3rd 1985 caused further damage. Reconstruction began immediately after this earthquake, starting with the bell-tower, which was rebuilt using lighter material. Then the facade was repaired, reverting to the original plan.

One of the major works on this occasion was the rebuilding of the dome. It is a metal structure, completely lined with wood. Included in the interior work was a completely new roof lining and a modification of the eaves.

In a marble urn in the crypt is preserved the heart of Diego Portales, a nineteenth century statesman. There is also an original painting by Moretto; and an image of the Virgen del Carmen carved in a single piece of wood; a figure of Christ carved in a single piece of ivory (except for the arms); a silver sacrarium and a traditional organ.
Iglesia de la Compañía de Jesús

This church belonging to the Company of Jesus is at the foot of Cerro Larraín.

The construction of the first church of the Order began in 1852, and this gave way in 1899 to the laying of the first stone of the present construction, under project architect Nicanor Marambio.

The church is located in the El Almendral barrio on one side of the Congreso Nacional, and belongs to the bishopric of Valparaíso.

It was founded in 1838, but the first stone was only laid in 1869. The project architect responsible for the building was Juan Eduardo Fehrman, and the architect who directed the work was Teodoro Burchard.

In 1906, reconstruction work was carried out after the earthquake which shook the city of Valparaíso.

Of particular interest in this church is the image of Jesus of Nazareth called “El Cristo atado a la Columna” (Christ tied to the column), which originally belonged to the Augustinian Fathers. Afterwards it was kept in the Iglesia del Espíritu Santo, on the Plaza Victoria, and was then donated to a family who gave it to the chapel on the Cerro La Merced, which belongs to the Iglesia Los Doce Apóstoles. In the 1950s the image was brought to the church and has been kept here ever since.

This church was built in 1931 and functioned as a convent. It belonged to the Congregación de Los Padres Carmelitas and later came under the control of the Diocese of Valparaíso.

Its features include the altar, brought from Spain, with all its carvings of saints in wood painted in lifelike colors, and also the stained windows.

In the church there are altars to the Sacred Heart, Santa Rita de Casia, the Blessed Padre Alberto Hurtado, San Vicente de Paul and also Santa Teresa de Los Andes, among others.

The church is in the El Almendral barrio and belongs to the Congregación de los Sagrados Corazones.

The land was obtained in 1861 and the first stone was laid in 1866. In 1874, this great work was inaugurated. The project architect responsible for the building was Lucien Hénault.

It was severely damaged in the earthquake in 1906, and for this reason rebuilding was necessary.

Declared a National Monument on July 18th 1983, the church is located on the Cerro Barón.

The first stone of the Franciscan complex was laid in 1845. In 1851 the church was taken into use, and then in 1890 the present facade was built by the architect Eduardo Provasoli.

A violent fire partially destroyed the church in 1983, but it was rebuilt with all its characteristics preserved, such as the brick tower whose silhouette is so easily recognizable to anyone who approaches the Port of Valparaíso.

The church is in the El Almendral barrio and belongs to the Congregación Claretiana.

The construction of the first church began in 1895, but unfortunately it had to be demolished after the serious damage caused by the 1906 earthquake. The present church was inaugurated in 1913. At the end of the last century it also suffered a serious fire which caused extensive damage; it was subsequently restored, with its original architectural features preserved.

The church is located on the Cerro Cordillera and belongs to the Orden de los Padres Mercedarios, who arrived at this site in 1903.

The first stone was laid in 1905, and already in 1906 two wings of the convent were functioning, and were occupied by the community.

After the devastating earthquake of 1906 the Order strengthened their constructions, which have resisted all the perils of nature since then.

The church was inaugurated on February 4th 1912 in a ceremony packed with the faithful. In the following year, the high altar was installed, made of wood painted in lifelike colors, in the tradition of the Congregación, in the Romantic style but with hints of the Baroque.

The 1906 earthquake made repairs essential, when the changes which can now be seen were effected. The tower, which was originally 25 meters high, was lowered. Irreparable damage to some its ornamentation meant that changes were made to the facade.

In 1620 it became a parish with the name of Nuestra Señora de Puerto Claro and in 1872 the name was changed to Matriz del Salvador del Mundo, which was the name given by the people.

It was seriously affected by the earthquake of July 1971, just when remodeling work was being begun in order to restore its original appearance.

The German Lutheran church is on the Cerro Concepción, near to Plaza Aníbal Pinto, and belongs to the German Evangelical Congregation.

The church is noteworthy for its elegant architectural lines, which are a notable point of reference in the picturesque sector where it is located. It has a tall tower and a high enclosing wall. elevado muro de contención. In the interior there is a square nave delineated by pointed arches and balconies, both constructed in wood.

The first stone was laid in 1897, and the Bliederhäuser brothers were responsible for the construction of the chapel

After the earthquake in 1906, which caused significant damage to the tower, it was repaired by Albert Sieger.

In 1879, the need arose for a church on the Cerro Alegre, where a great many Catholics, both Chilean and foreign, were living.

On August 6th 1886 construction work was started on a church that was to be dedicated to San Luis Gónzaga.

The construction of the San Luis church took two years. It is a solid, elegant, tasteful building, noted for its twin towers, its three naves in the Roman order with their capitals and the coffered ceiling in the Byzantine or renaissance style, its simple altars and beautiful images which make it a worthy space for the celebration of faith.

The church is located in Calle Condell and was inaugurated on October 8th 1869.

It is a picturesque building with architecture of British inspiration, making it a characteristic landmark in the center of Valparaíso.

The first chapel was built in 1856 in the Quebrada de San Agustín, where it remained until 1868, when the site occupied by the Iglesia Unión was acquired. Then in 1869, construction was started on the church, which was designed by the architect John Livingstone.

Capilla del Buen Pastor
The chapel, which belongs to the congregation of the Good Shepherd, is located on Cerro Placeres. At present it is the responsibility of the Parroquia de Lourdes.

The first stone of the present chapel was laid in 1926, and since then it has functioned as a place for prayer and reflection for the inmates of the women’s prison next door.

In the interior there is a painting copia pintada de La Piedad, beautiful French stained glass windows and statues of angels, and a harmonium in full working order. Finally, note the internal architecture in the form of a cross, specially designed for the inmates at the beginning of the last century.

The first oratorio in the Carlos Van Buren Hospital was built in 1845, and only in 1928 was the first stone of the present chapel laid, under the supervision of architects Roberto Lorca and Oscar Oyaneder.

It owes its name to the Virgin of the Miraculous Medal, who appeared in Paris, France, to a nun of the charitable order, and whose cult was extended by the work of San Vicente de Paul.

This chapel is located in the Cerro Playa Ancha and belongs to the order of the Dominican Fathers.

The land for the construction was given to the order of St Dominic in 1857, and in about 1873 work on the Capilla de Nuestra Señora del Rosario was begun.

The chapel contains the Virgen de Pompeya, which is visited regularly by the faithful.

The Congregación acquired the land for building in 1859 and the first chapel was built in 1867.

In 1880 the first stone of the second chapel was laid, and this had to undergo rebuilding works in 1906 on account of the devastating earthquake that year.

The present chapel was built in 1917 by the architect Víctor Auclair.

This chapel was declared a Historic National Monument on May 27th 2003. It was founded in 1884 and was originally the responsibility of the Hermanas de San Vicente de Paul, then of the Hermanas Adoratrices. Finally, in 1961, the Congregación de Santa Marta took over the chapel.

The structure has not been modified over the years, although it has been repaired on several occasions as a result of some of the earthquakes which have struck the area.

Note the cruciform design, the French stained glass and harmonium, and the marble floor, which replaced a previous one made of wood, giving the chapel an unmatched elegance.

The chapel is semi-public, and religious services are celebrated daily for the community at large.