Churches and Chapels in Santiago 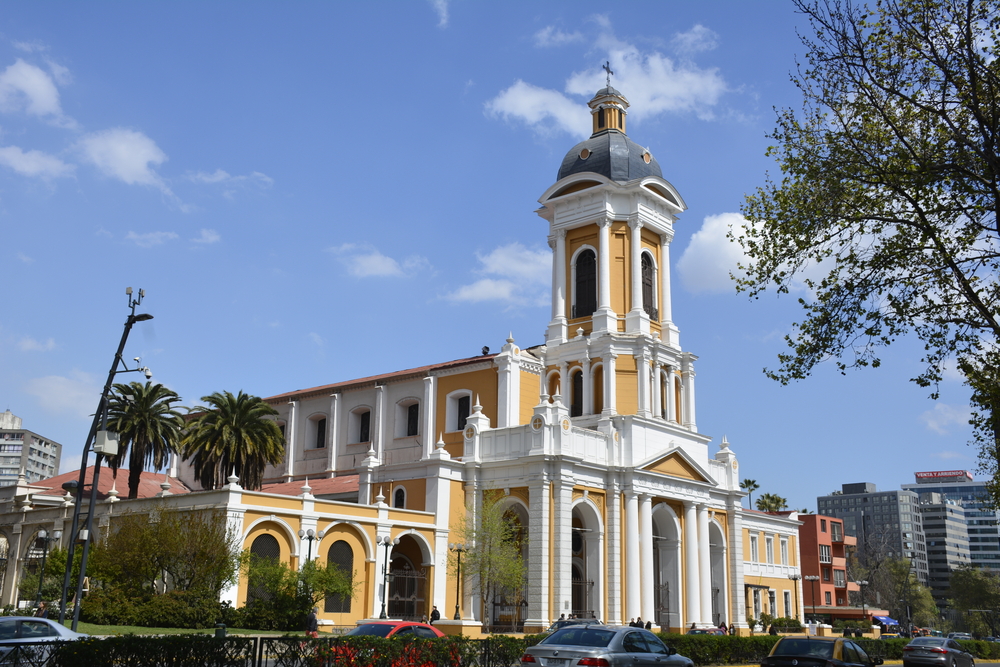 Iglesia de San Francisco
The church of San Francisco and the Franciscan monastery are located in Calle Londres Nº 4, in the Center of Santiago. This complex, built between 1586 and 1628 is the oldest work of architecture in the country. It is a National Monument.

The monastery is now the Museo Colonial, and on its walls hang 42 canvases, which recount the life of Saint Francis. They were painted in Peru and date from 1684.

The Virgen del Socorro, an object of great devotion during the colonial period, is now kept on the high altar of the church.
http://www.museosanfrancisco.cl

Catedral de Santiago
The Cathedral stands on the Plaza de Armas, where its main entrance is located, between Bandera and Catedral streets. It is a Historical Monument. There were two previous cathedrals, both destroyed by earthquakes.

Building of the present structure began in 1748, and after 40 years responsibility for the work was entrusted to the Italian architect Joaquín Toesca, who had to complete the final stage of the work, the facade.

The building was sanctified as a cathedral by Pope Gregory XVI in 1840, although a second act had to be signed in 1873 by Pope Pius IX as the original had been lost.

Basílica de La Merced
This church, located in Calle Mac Iver Nº 341, belongs to the Order of Mercy, which was founded in Barcelona and introduced into Chile by Diego de Almagro. The Basílica de la Merced contains the tombs of Inés de Suárez and Mateo Toro y Zambrano, important figures in the history of Chile. The church collapsed in earthquakes on two separate occasions, and the present structure dates from 1760.

Here you will find the Museo de la Merced, which has an excellent collection of colonial religious imagery made in Quito. There is also silverwork, and objects from Easter Island.

It is a small church; the style is neoclassical and the facade is a reproduction of the Arc de Triomphe. Inside there is a relic of the Cross donated by Carlos V and a colonial figure of Christ on the high altar, which dates from the seventeenth century. It was declared a Historical Monument on June 29, 1983.

Iglesia de San Ignacio
Located in Calle Padre Alonso de Ovalle Nº 1452. The church was built between 1867 and 1871 in the Italian Renaissance style. The architects responsible were Eusebio Chelly and Ignacio Cremonesi.

Iglesia de Santo Domingo
Located in calle Santo Domingo Nº 961. The order was founded by Santo Domingo de Guzmán in the thirteenth century on a site granted by the King.
This church, in neoclassical style, is the work of Joaquín Toesca. The interior has three naves with single-centered arches. The present church, inaugurated in 1808, is the fourth built on this site.

Iglesia Santa Ana
Located in Calle Catedral Nº 1549. The architect responsible was the Chilean Juan José Goycolea. It was rebuilt in 1933. To one side there is a small chapel with an altar with a white altarpiece.

Iglesia y Convento de la Recoleta Franciscana
Located in Avenida Recoleta Nº 220 – 270, the church has been rebuilt on three occasions and contains a museum recording Fray Andrecito. It was declared a National Monument in 1973.

Iglesia y Convento Recoleta Dominica
Located in calle Recoleta Nº 686. Construction began in the middle of the eighteenth century, although the existing cloisters date from the end of the nineteenth century.

The La Recoleta church dates from the 1850s, when a new altar for the old church was ordered from Rome.

Santuario y Basílica de Lourdes
Located in calle Lourdes Nº 645. The site was donated for a sanctuary by Alejandro Vigoroux Castel, a French Basque who was living in Santiago. The grotto was constructed in 1908 and the first stone of the basilica was laid in 1929.

The Basilica is in the Byzantine style with an interesting dome painted with the images of sixteen prophets and the four evangelists.

Templo Parroquial de los Santos Angeles Custodios
Located in Calle Rodolfo Vergara Nº 0252 in Santiago. In 1884 this church replaced the chapel of the Seminario Conciliar de Santiago. The building is constructed of brickwork, stuccoed and painted to look like marble in the interior.

Templo Votivo de Maipú
Located in calle Carmen Nº 1750 in Maipú, Santiago, the church stands on the site of the battle of Maipú, where a Sanctuary to the Virgen del Carmen, patron saint of the Chilean army, was raised. The first stone of the church was laid by Bernardo O’Higgins and it was completed in 1887.

Parroquia Nuestra Señora de Apoquindo
Located in calle Patricia Nº 9060 en Las Condes, Santiago, the parish church is open Tuesday through Saturday from 09:30 to 13:30 hrs. and Monday through Friday from 16:00 to 20:00 hrs.
http://www.iglesia.cl/nsapoquindo/

Parroquia Inmaculada Concepción de Vitacura
Located in Calle Vitacura Nº 3729, at the corner with Alonso de Córdova. The Fathers of the Sacred heart are responsible for this church.

Construction of the Parroquia was started on December 19, 1953, under architect José Manuel De Ferrari Jullian. The Stations of the Cross, the figure of Christ over the altar and the image of the Virgin Mary are the work of the sculptor Peter Horn.
http://www.iglesia.cl/inmaculadaconcepciondevitacura/

Parroquia San Francisco de Sales de Vitacura
Located in Avenida Santa María Nº 5600 in Vitacura, Santiago, this parish church is named after a saint, originally from Savoy, who lived in the tercera mitad of the sixteenth century and became Bishop of Geneva. He is the Patron Saint of journalists.
http://www.parroquiasanfranciscodesales.cl/

Parroquia Nuestra Señora del Carmen de Maipú
The patron saint of the church is the Virgen del Carmen and it is located in Avenida Monumento Nº 1777 in Maipú, Santiago. Mass is said Tuesday through Saturday at 20 hrs. On Sundays it is said at 08.00, 11.30 and 20 hrs.
http://www.parroquiadelcarmen.cl/