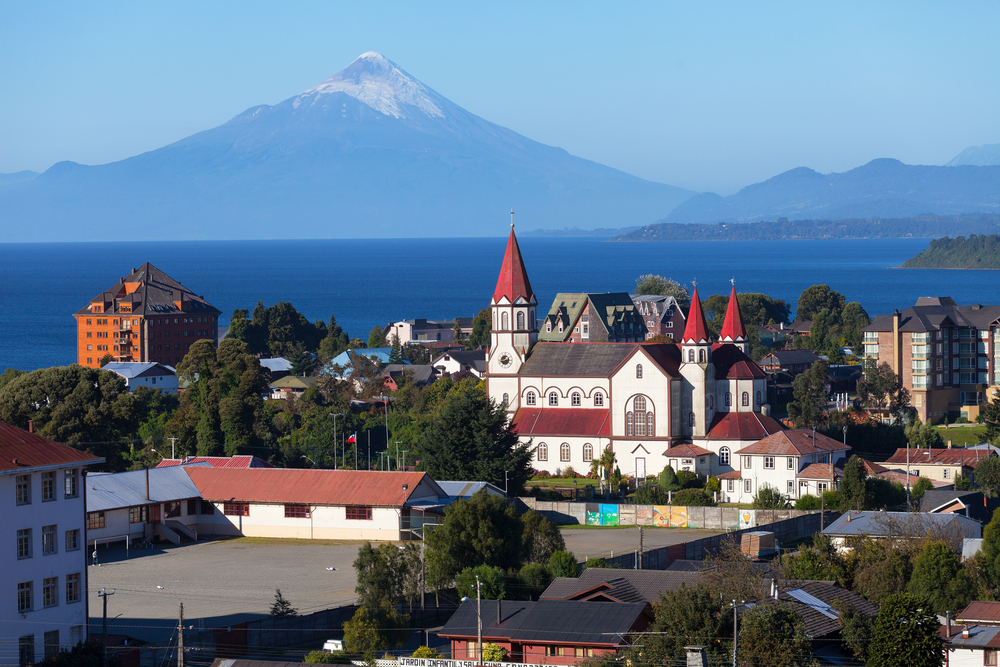 Playa Niklitschek
This is a beautiful beach set in natural surroundings only 7 km from the town. There is a private beach, launching site, sporting activities, jetty, football pitch, kiosks, car park and fully equipped camp site.

Ensenada
46 km de Puerto Varas, this was originally intended as the disembarkation port for tourists travelling on to Argentina before the construction of the road along the south coast of Lago Llanquihue. Today it is the principal tourism center on the east coast of the lake. It has a fine sand beach 2.5 km long, restaurants, camp site and huts.

Playa El Venado
This beach is on the lake 19 km from Puerto Varas.

Isla Loreley
If you follow the continuation of the costanera from Puerto Varas in the direction of Ensenada, you will reach La Poza, a beautiful little lake set among steep cliffs and lush vegetation. There is a service offering boat trips round the lake, including visits to Loreley island. There is good fishing in the lake.

Petrohué
This little port stands on the shore of the lake known as “Lago Todos Los Santos”, or “Lago Esmeralda” on account of the emerald green color of the water. The services available include accommodation, places to eat and fishing equipment for hire.

The ferry across the lake is a modern catamaran. The voyage lasts about two hours and provides beautiful views of the lake, the magnificent volcanoes Osorno and Puntiagudo, the Cerro Techado, Isla Margarita and the wooded, snow-capped mountains around, finally arriving at the little port of Peulla.

Saltos del Petrohué
These falls are on the Río Petrohué. The river runs between huge masses of solidified lava, consisting of small stones set hard in an eye-catching vitreous material. The blocks were formed when the crystallized lava cracked as it cooled, and was subsequently re-sealed by a new layer of lava. The falls themselves are located in the Parque Nacional Vicente Pérez Rosales.

Lago Todos los Santos
The lake lies 18 km from Puerto Varas and 82 km northeast of Puerto Montt. 36 km long and with a surface area of 175 km², it is also known as Lago Esmeralda, on account of the emerald green color of the water.

Lago Todos los Santos is volcanic in origin, and was caused when the lava from the Volcán Osorno blocked the valley and diverted the waters of the Río Petrohué (which had previously flowed into Lago Llanquihue) towards Ralún.

It is in a beautiful setting between the three volcanoes, Osorno, Puntiagudo and Tronador, surrounded by forests of coigüe, ulmo, tepa, tineo and olivillo. At a higher altitude there are forests of lenga.

Around the lake live mammals such as pudú, pumas, foxes, the huillín or river otter and the quique. There are also Chilean marsupials such as the comadreja trompuda and the monito de monte. Bird species of particular interest include the huala, steamer duck, torrent duck, kingfisher, traro, picaflor chico, magellanic woodpecker, caiquén, common tagua and eagles.

Las Cascadas
This village of 700 inhabitants stands on the shores of Lago Llanquihue, at the foot of Volcán Osorno. There are lodging houses for summer visitors, beaches and a campsite. Buses run daily to Osorno.

Paso Pérez Rosales
This border pass lies 120 km from Puerto Varas. Take Ruta 5 to Ensenada; then there is 16 km of graveled road to Lago Todos Los Santos, and a ferry passage of 50 km across Lago Todos Los Santos; 26 km from Peulla to the pass. The entry point into Argentina is Puerto Frías on the lake of the same name, which is above the westernmost end of Lago Nahuel Huapi.

Paso Río Puelo
From Puerto Varas you can travel to Puelo via the road which goes to Ensenada and Cochamó. From there the only way to the pass is by trails, tracks and little ferries across rivers and lakes. The pass brings you to Lago Puelo in Argentina; follow the north side of the lake to reach the little village of Lago Puelo, and there is a better road from there down to El Bolsón.

Peulla
This is a small village which offers a range of services: lodgings, food, customs, border police and a first aid post.

In this peaceful spot you can enjoy an abundance of vegetation and waterfalls. From here you can go on excursions to such beautiful places as Casa Pangue, Río Peula, Brazo del Río Esperanza and Lago Cayutúe
There is a road from Peulla to Puerto Frías, which is the entry point into Argentina. The way continues with a ferry across to Puerto Alegre, and from there by road to Puerto Blest, a beautiful place on the shores of Lago Nahuel-Huapi. You then cross this lake to Puerto Pañuelo or Playa Bonita, both close to San Carlos de Bariloche. This pass, a must for the tourist, is recognized as one of the most beautiful in the Andes.