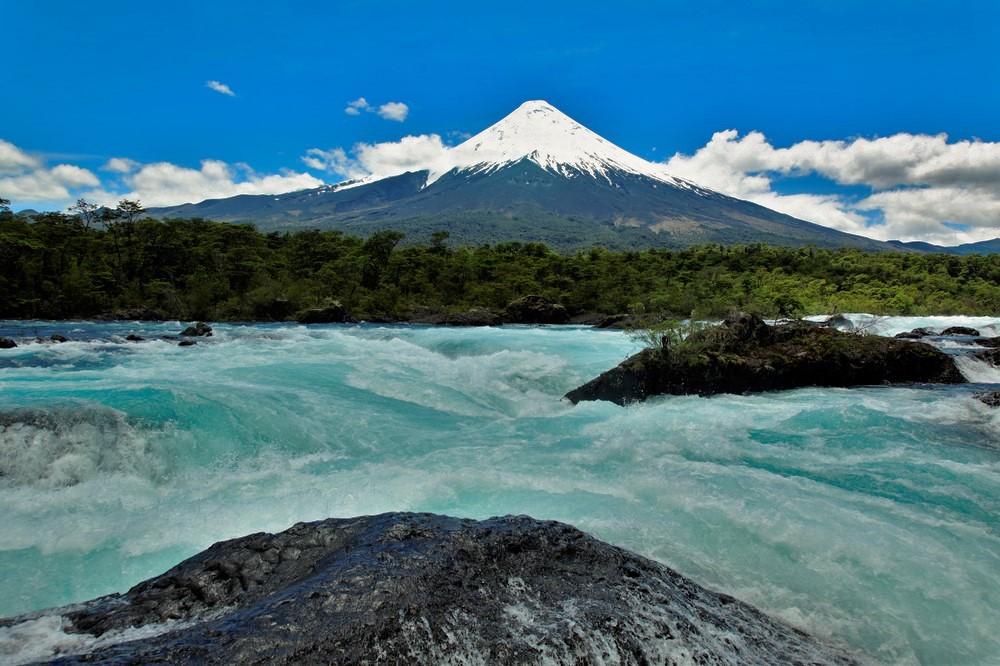 La Unión 10 km from the Pan-American Highway South, and 40 km from Osorno, this town has 23,265 inhabitants and is located on the banks of the Río Llollehue.Founded in 1821 as an agricultural service center for “Los Llanos” to the north of Río Bueno, the city was renowned for its breweries, tanneries, linen factories and mills. Nowadays, you can still see architectural evidence of the German influence.

Río Bueno
A city located 3 km from the Pan-American Highway, and 36 km from Osorno. It has a population of 13,150. Initially it was a crossing point on the Río Bueno river, where the Spaniards built a fort that would later become a city.

Maicolpué
Located 65 km west of Osorno, this is a well-known beach resort with lodging, camping areas, restaurants and white sand beaches. The town is surrounded by steep hills, with a lot of summer homes, and native forest that goes right down to the sea.

Pucatrihue
Situated 69 km west of Osorno, Pucatrihue is 4 km from Maicolpué and is a popular beach resort that gets very crowded in the summer. The 3 km-long beach runs all the way from the Contraco river to the Choroy Traiguén river. There you will see summer homes among the dunes, rocks and cliffs.

Termas de Puyehue
These hot spring baths were created in 1910 and offer the visitor the basic services of natural and thermal hot springs. The installations include both sulfur and mud baths, and two swimming pools, one of them covered. The hot springs rise from their source in the earth pure and crystalline and reach temperatures of up to 70º C. They have a great soothing and analgesic quality, very beneficial for illnesses associated with stress. They are recommended for the treatment of skin diseases, rheumatism, arthritis, diabetes, obesity, disorders of the nervous and circulatory systems and neuralgia.

Museo de Autos Moncopulli
This is the only automobile museum in Chile. It is located 25 km from Ruta Internacional 215, in the municipality of Puyehue, Osorno and was founded by Bernardo Eggers.There is an exhibition of 36 cars of all makes, models and years. They are organized according to make and year in a large showroom and in additional areas you can visit other related exhibits. The museum is open in the summer (December to March) from 10 a.m. to 8 p.m. every day of the week and in winter (April to November) from 10 a.m. to 6:30 p.m. from Tuesday to Sunday.

Termas Aguas CalientesA hot springs complex located on the banks of the Río Chanleufú, it has two swimming pools and sixteen individual tubs, with water that rises from the earth at 75º C and cools to 35 or 37º C.The facilities include a small hotel, barbecue shelters, 26 cabins, two camping areas and a Centro de Información Medio Ambiental (Environmental Information Center) where you can find information about the flora and fauna of the area.

Puacho
Located 35 km from Osorno on the road that leads to the sea, Puacho is the service center for San Juan de la Costa, made up of Huilliche communities. The Huilliche Art Fair takes place at the end of January and beginning of February.

Bahía Mansa
Located 55 km from Osorno, this is a small fishing creek and collection center for seafood and alerce shakes. It is located in a wild rocky bay, with access by a road which descends through the hills. It was formerly a small port.

Entre Lagos
Located 46 km from Osorno, with a population of 3,358, the town is an old timber and services lake port. The train used to call here to take away the production of the businesses around Puyehue and Rupanco Lakes. Nowadays, its principal activity is tourism.

Lago Rupanco
Its name means “water passing this way” and it covers an area of 23,000 hectares. The Puntiagudo and Osorno volcanoes are reflected in its waters. It is located 112 km from Osorno and is accessible by paved road. The lake is glacial in origin; its surface area is 180 km², with a maximum length of 45 km and a width of approximately 11 km.In it are the Las Cabras (Goats) and Los Ciervos (Deer)Islands, and on the latter European deer are bred. Round its shores you will find a number of bays, and pleasant, beautiful beaches, where you can do water sports and salmon fishing. Its waters are blue with a visibility of 8 to 10 m, and the temperature of the area in summer is 9º to 18ºC. The flora is composed of olivillos, lumas, arrayanes, chilcas and ferns. Its aquatic wildlife is made up of hualas, Chilean coots, flightless steamer ducks, brown pintail ducks, black-crowned night herons, kingfishers and cormorants. As far as the bird life is concerned, there are birds of prey such as the pygmy owl, the trauco, the tiuque, the peuco and the aguilucho.There are three routes into the area from the north, and from the south a path runs along the shore to the easternmost point of the lake.

Las Cascadas
This is a small village only 36 km from Osorno. During the winter it is very quiet, but in the summer it is transformed into a popular holiday resort. It is on the shore of Lago Llanquihue, opposite the town of the same name, at the foot of the Volcán Osorno.

Río Negro
Located to the south of Osorno and founded in 1896. It is said that the origins go back to a feud between two large farm owners, who created Purranque and Río Negro.From here there is a fantastic view of the Volcán Osorno and beautiful prairies used for agriculture and cattle ranching.

Puerto Octay
Located 54 km to the southeast of Osorno. Here you can enjoy the Playa Centinela and Maitén beaches.In the city you can visit the Iglesia Parroquial de Puerto Octay which dates from 1911 and the building which used to house the Escuela de Monjas, built in 1913. On Calle Esperanza you can visit the Casa de la Cultura Emilio Held Winckler which has a collection of historical documents and photographs of the original settlers of the area.

Purranque
Founded on April 18, 1911 by Tomás Burgos Sotomayor, it is located 38 km south of Osorno on the Pan-American Highway South.The arrival of the train made possible the founding of this town, originally known as “Villa Los Burgos”.The Fiesta de San Sebastián is celebrated annually here on January 20; it is one of the most important festivals in the area. It attracts more than 30,000 people every year.