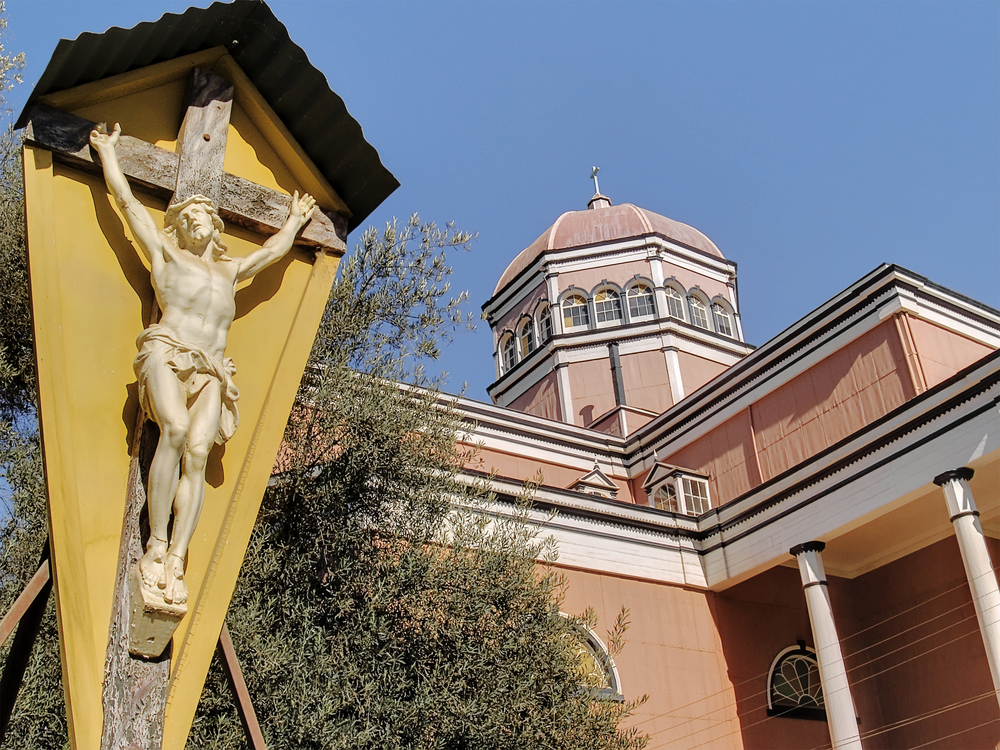 This city, with a population of 10,216, is 50 km southwest of Coquimbo. It is surrounded by desert hills with houses at the bottom of a long ravine and large mounds of earth.

There is a shrine consisting of the Templo Antiguo (Old Church) and the Templo Grande (Big Church) or Basilica in honor of the Virgen del Rosario who was for a long time the patron saint of La Serena. This city used to be an important place of pilgrimage and prayer.

There are two festivals in honor of the Virgen de Andacollo: the Fiesta Chica on the first Sunday in October and the Fiesta Grande on December 26.
You can reach the Andacollo junction from La Serena on route D 43 traveling south. From the junction it is 27 km.

This church was erected in 1789 and is the place where the image of the Virgen del Rosario is venerated all year round. It has a long, narrow nave, two towers, a side chapel and sacristy. It has been a National Monument since 1981.

The Basilica, which took two years to build, was inaugurated in 1893. It is in the Italian neo-classical style, with five interior naves and crossing. It was declared a basilica by His Holiness John Paul II in 1998, given its devotional and historical attraction and its surroundings. It was declared a National Monument in 1981.

A trapiche was an old ore-crushing mill, which was rented out by the day. Only 30 of the 150 trapiches which used to operate still exist. They are in the area around Andacollo.

Plaza Pedro Nolasco Videla
The plaza is located on Calle Urmeneta, and is where visitors and pilgrims arrive to visit Andacollo for the festivals in honor of the Virgin. It is notable for the fountain, with a beautiful copper sculpture of a native woman named Collo, popularly believed to have been the finder of image of the Virgen del Rosario.